We have a bit of catching up to do, so the format is a little different.

Share All sharing options for: Player Ratings vs Man City and Chelsea

This week turned out to be busier than expected, so Player Ratings are coming back to you a bit late. Since you all took the time to vote for them, I owe it to you to give you back some analysis. Since I'm doing two games, I won't give the graph for each player. Just the graphs of certain players that I feel tell the story of the match.

Say what you will about Manchester City not fielding a strong side, Newcastle took the game to the Citizens.  The community agreed, giving fairly high marks to Newcastle's tactics. 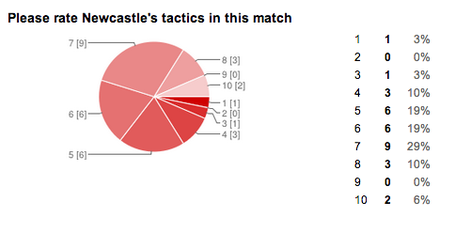 But, Newcastle lost the match. Can you guess where fans placed the blame? I'll give you a hint, he wears #9.

Papiss Cisse attempted six shots in this game, but only put one on target. He was offsides three times. He unleashed good looking strikes when he was offsides and hit the ball completely wrong when he was off. I don't know how much of these ratings are indicative of how he played (I personally felt he was more involved in this match than he had been the entire year) and how much of it is just the fans getting tired of not seeing Newcastle's #9 not score. I'd wager it's the latter.

For a match that Newcastle lost 2-0, the defense was well received. Here's an example.

As I said in last week's podcast, I felt like Newcastle were unlucky to not win this match, or at least not get a goal. Jim called it a solid Alan Pardew impression, but I think the community responses bear that out. I think the community overall felt Newcastle played a solid match, but a lack of finish was overwhelmingly frustrating. On to happier things like the Chelsea match.

So....Roman Abramovich must have kicked Moussa Sissoko's dog or something because he was an absolute beast in this match. Sissoko was everywhere and played a solid match from start to finish. You loved him:

Six 10's is a pretty good indicator of how he played. I'm guessing we had two Chelsea fans vote in the poll, because I can't think of anything he did wrong in the match.

Hey, how do y'all feel about Vernon Anita?

You approve. And hey, we had a Gabriel Obertan sighting. Was that nice? 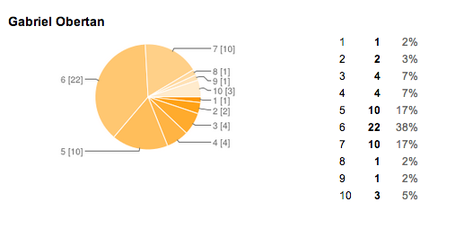 He did get less playing time than Anita, so maybe that depressed his results a bit, but both were welcome additions to the side. I mean, people LOVED Newcastle's subs.

Ten 10's! Do you people even realize Alan Pardew is pulling these strings? You thought he was a genius! 90% of you rated our subs at a 7 or higher.

The two goal scorer more or less split Man of the Match honors though...

Of course, you can't keep a clean sheet against Chelsea without some great defending. I'm going to highlight Mapou Yanga-Mbiwa here. He's had a rough go of this season, but I felt he really stepped up to the task against the Blues.

It was a team effort for Newcastle to get the win, but it was a badly needed one. After the derby loss and the cup defeat, the win over Chelsea is just what the Mags needed to give them a bit of confidence as they head to London to face Spurs. We'll find out Sunday if Newcastle take their confidence higher or come crashing back down.