We've reached the quarter pole for the 2013-14 Premier League season. Where have Newcastle United been, and where are they going?

Share All sharing options for: Newcastle United Through Ten Games: The Narrative

Newcastle started their year the way they started the previous one: by not purchasing any players over the summer. The decision - whether conscious or not - to stand pat after publicly acknowledging that last year's policy was a mistake is certainly a curious one, and certainly qualifies as a symbol for what passes as big picture decision-making at Newcastle United under Mike Ashley. They did bring in Loic Remy on loan after famously losing out on his signature to QPR in January, and the striker has certainly put his stamp on the club. Still, the lack of investment has reared its ugly head at the back of the formation. Fabricio Coloccini and Steven Taylor, the two starting center backs in the opening match, were last seen sitting together taking in a match with the rest of the St James' Park patrons. Meanwhile, Newcastle have conceded 16 goals (17th in the league) and Tim Krul's save percentage is a paltry 66%, an indictment of both him and the players in front of him.
It didn't inspire confidence among fans, then, when Newcastle got beat 4-0 by Manchester City on the opening weekend with essentially the same squad that narrowly escaped relegation the season before. It was always a tough ask to get a result against City (especially given Alan Pardew's track record against them), but the manner in which they conceded victory was downright depressing. They played a negative tactic, instantly dashing any smoldering hopes that 2011-12 wasn't just an anomaly, and allowed David Silva to score just six minutes in. They would let another one in before half, and the result was already written in stone before Steven Taylor threw an elbow and got sent off. Those 48 minutes that he played that day remain the only 48 minutes of action he has seen this season. Remember when he got called up to the England squad? That was fun.
The next match was only better in that they received a point from it, but it was the kind of 0-0 draw that detractors of the sport point to when they want to call it boring. Neither West Ham nor Newcastle could generate anything resembling a scoring chance, and in fact only produced 1 shot on goal combined. Unfortunately, Newcastle were the team shut out in that department. Their shot chart from that match ought to come with a warning from the Surgeon General. There's the shot that Yoan Gouffran missed at point blank in stoppage time (There's still a non-zero chance this one comes back to haunt us. Hope you didn't need to catch up on sleep tonight), and beyond that, it's a series of blood red lines that are too long to fit on the chart. 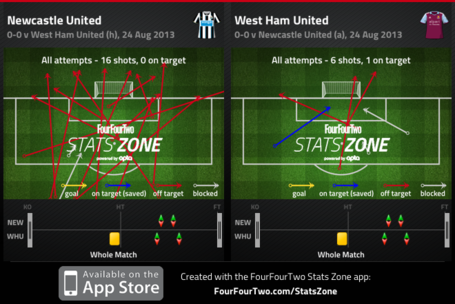 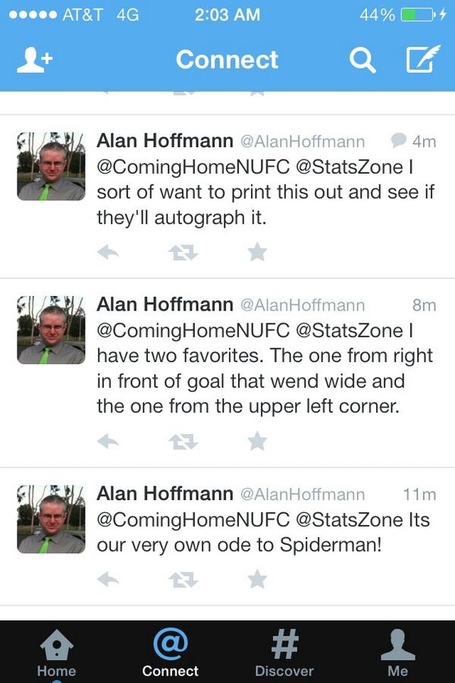 Let's just move on.
Fortunately, Newcastle followed that up with a dominant performance against what we now know is a very bad Fulham team. At the time, we had concerns that we were the terrible ones, so the performance was encouraging nonetheless. It was rare sort of match where the team played very well together, and yet everybody who watched all agreed that Hatem Ben Arfa was far and away the difference maker. It was a masterful performance in which, among other things, he created three separate chances with crosses, forced two non-routine saves, and scored a wonder goal. He was also dispossessed three times. Let's totally focus on that part of his game.
The next match, a 2-1 victory over Aston Villa, was another Ben Arfa-heavy performance, as he continued to create chances for himself in the final third. There's still a lot of this season's story left to be written, but it's kind of quaint to think back to this time, when we naively believed HBA was The Chosen One who would lead us out of the darkness to defeat the Krull beast or something. (Speaking of Timmy, he was shaky this match. He's been about as consistent as Newcastle so far.) Now he's the symbol of this club's inability to link the midfield with the strikers, a problem that has persisted for far too long.
Steve Bruce's surprising Hull City team were next, and Bruce was determined not to let Hatem Ben Arfa beat him. Loic Remy found himself in space as a result and took advantage, scoring twice. Unfortunately, defensive errors caused by the Tigers' high pressure kept them in it, and Sone Aluko closed the door with a superb individual effort that put them ahead for good. The Toon weren't entirely awful in this game, but their tendency to play down to their competition was on full display.
They lost to Everton by the same score the very next week, but there was nothing encouraging to take from this one. The final score was flattering to the losers, as they conceded in the opening five minutes and eventually fell behind by three before half. The two consolation goals were basically a result of a relaxed sense of urgency on Everton's part. The optimist might be tempted to praise the Magpies for not giving up, but that would be very generous indeed. There were some fine individual performers, but at the end of the day it was a poor showing from a club that was supposed to be motivated following their loss the week prior.
Against Cardiff City, they were bailed out by (stop me if you've heard this one before) Loic Remy. To give you an idea on what kind of impact he had, here's how the CHN community rated Remy following the match:

What's interesting about this one is that he hardly touched the ball all match. When he did, though, it was magical. This, more than any other match (and Remy has had some very good performances), shows what a difference maker he can be. The great thing about it is that he's not striking at an unbelievable rate like Ba and Cisse did when they were on fire in 2011-12. Loic Remy might just be the consistent up-front player we've been looking for - and we're not even sure his loan arrangement has a purchase option attached. Newcastle United.
The Liverpool match, also known as the Paul Dummett match in some circles, encapsulates exactly what it means to be a Newcastle supporter. There were lows (Mapou Yanga-Mbiwa's incredibly stupid red card, the Suarez-Sturridge goal that could have been prevented three different ways) and highs (the team's collective response to playing down a man, the Dummett goal). We were all feeling good about things following this one, so we really should have seen the derby match coming.
The derby match happened.
Loic Remy scores against Chelsea and celebrates with a fan.
To their credit, Newcastle bounced back against Chelsea, and though it took a disinterested side that by all appearances expected to win simply by showing up to awaken the hosts, they took advantage. The Magpies came out in the second half looking interested in a result, and good things happened (Crazy, right?) Loic Remy was again instrumental, and the defense, led by Cheik Tiote before an injury, was efficiently effective.
NUFC now head into the second quarter of the season, and their next test is a doozy. They'll travel to White Hart Lane to face Tottenham Hotspur, a team who have conceded just five goals in their first ten matches. The halfway point will take place right in the midst of the cluttered holiday schedule, of course, and by then we'll have a better idea of what needs to be done in the January transfer window. As we've seen, some defensive help might be nice, and the sooner we can #BuyLoicRemy, the better. Then again, nothing ever goes the way we anticipate that it will on Tyneside.