Catching Up on Player Ratings: Norwich and West Brom

Share All sharing options for: Catching Up on Player Ratings: Norwich and West Brom

I've fallen behind on these player ratings' polls (that will happen at semester's end, won't it?) and it is time to do some catching up. I feel like I can get West Brom and Norwich together. The game against Manchester United deserves its own post, and Swansea and Southampton can get their own posts as well.

But, we turn our attention back nearly a month a go when Newcastle ran out a five game winning streak. The streak concluded with two home wins, versus Norwich and West Bromwich Albion by 2-1 scores each. The three goal mark is ever elusive for Newcastle (not hitting it since a 4-2 home win over Southampton last season) but if memory serves from those two games, it wasn't from lack of chances. It may, however, been due to lack of trying. Newcastle frustratingly sat back in those matches. It should be said, credit to Norwich, who scored in the 80th minute to make things interesting. WBA equalized in the 53' a week later.

I won't be doing graphs player by player, just highlighting those who jump out at me. 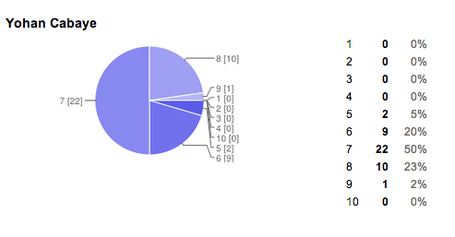 Oh what a, er....not half bad corner delivery will do! Cabaye's corner kick was fairly straight and probably should have been handled by the keeper, but it wasn't. Instead, it found Loic Remy's head and a 1-0 Newcastle lead with just two minutes gone. Cabaye played well outside of his corner, and was fairly consistent for the 67 minutes he played. He got deserved high marks for his play.

Perhaps the only two to out rank him in the ratings poll were the goal scorers.

We talked during the last podcast about Gouffran's pay this year, and I think his ratings versus Norwich reflect it. When 93% of the respondents give you a seven or higher, you've had a legit game. Gouffran has not only been scoring goals this year, but he's played well defensively and has been aggressive on the attack. I likened him to a Jonas from a few years ago, because he is simply everywhere. If Gouffran continues in this form, the French National Team may keep an eye on him.

As for Remy...I don't know what else could be said. He's been so good this year that it was a shock when he let a golden opportunity slide by him against Southampton. Say what you will about Cabaye's delivery, but Remy took full advantage and ended Newcastle's corner kick scoring drought.

No one defender stood out on defense in terms of who the community thought might be blamed for the goal, but how you felt about tactics was somewhat interesting.

You'd think taking a 2-0 lead into the final ten minutes of the game would have a community more excited, but no. We saw Newcastle fall back, not try for a third goal and let a Norwich side that plays horribly on the road find a foothold back into the match. I do consider rankings 7 and up to be "high quality marks", but there's a good number of 6's and 5's as well. No one hated the tactics used, but no one was crazy about them either.

The game against West Brom had all the makings of a game where Newcastle gave away a draw or worse against a team lower on the table and in a game where they had controlled play early. West Brom had leveled the scores just four minutes before Moussa Sissoko unleashed an absolute screamer. Remy nodded it down with his head and Sissoko made no mistake. Do you want to watch it? Of course you do.

We called it a "Sissoko Thunderbastard" for a reason. The keeper had no chance on it. Well done by Remy as well to sense the opportunity and get the ball to the open man by any means necessary.

The community was not as kind to the defenders in this match, as summed up by the middle of the road marks given to Coloccini and Santon. 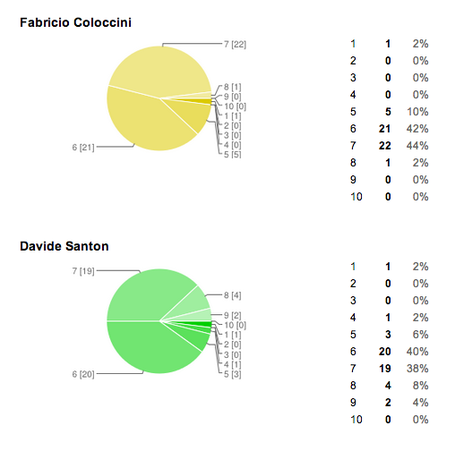 Right on the border between having solid games and average games. If Newcastle are going to play back, defenders can't be average. Newcastle got bailed out in the end, but will need better defending down the stretch.

However, quibble as we might (we will) these were two wins. Six points that will help to readjust Newcastle's focus as we head into the new year. When the season started, some said Newcastle may be in a relegation fight. After all, the same cast was back from last year's train wreck. But the pieces have somehow cobbled themselves together, and the club has a real shot at qualifying for Europe. From these two games and the community reactions, I feel that Newcastle must do three things in order to do so (and play better than they did in these matches).

1) Attack. This team is built to attack, and when Sissoko and Gouffran are getting goals, it should be scary. There's to much talent up front and in the mid-field to sit back.

2) Have great defending. The wording of this may seem odd, but it really means the back four can't be average. If you think to the Manchester United game, Newcastle was excellent at clogging up the midfield and not letting Manchester United get into any sort of rhythm.

3) Get playmakers into space. Anita wasn't talked about a lot in these two games, but he's played very well of late. He and Hatem Ben Arfa seem to be good at taking on defenders and finding space. I'd like to see them do this in the final third. I feel that to many of Newcastle's chances come from distance and these low percentage shots aren't doing much good. Attacks shouldn't end 20 yards from goal.