Offside? You be the Judge

Share All sharing options for: Offside? You be the Judge

Newcastle drew 0-0 with Metalist Kharkiv at home on Thursday in the first leg of Europa League Round of 32 play, but the tie was not without controversy. Two goals, both scored by Papiss Cisse were disallowed when Newcastle players were judged offside. Were the goals wrongly negated? Alan Pardew thinks so:

Both 'goals' were goals. When you see the replays, you can see that. The first one, I have to say, I was a little bit undecided from where I stood, but the second one I thought was a definite goal.

Pardew acknowledges that his position on the pitch colors his perspective, but his comments are interesting. From my point of view, the first goal is a no-brainer, and the second one is a bit closer. Let's take a look at the screenshots:

Moussa Sissoko, shown here in the middle of the frame, is the one called offside. You may recall that the linesman delayed making the call. At the time, I was upset at the lateness of the flag, but he actually plays that part correctly. After Gabriel Obertan's through ball, both Sissoko and Cisse (shown here at the top) are running after it. If Cisse touches the ball first, the linesman is willing to let the play stand. As soon as Sissoko gathers the ball, he raises the flag, though nobody notices until the play has been carried through to completion. To the issue at hand: It's not even necessary to draw a line on this one. The defender at the top is clearly in front of Sissoko, as indicated by the mowed strips of grass on the pitch. It's likely that the official was deceived by the player directly next to Moussa, who was moving forward in an attempt to trap him. It's not an excuse, however. There are no "it's a fast game and these snap judgments are hard to make in a split second" arguments to be made (that will happen in a moment). It's the wrong decision and it's not close.

For the sake of being completionists, let's look at Sissoko's pass to Cisse in front of goal to ensure it was indeed a square pass. 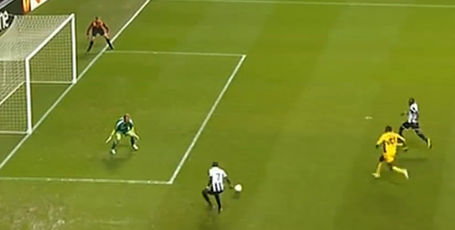 Yep. I couldn't ever freeze the frame exactly on the moment that Moussa makes the pass. This is just after his last touch. Cisse is not only onside because he's behind the ball, but he's got a defender in front of him as well. This is as onside as Papiss got all night long.

The second one was a little closer, which is a lot like saying that the moon is closer to earth than Pluto. Here's the cross from Mapou Yanga-Mbiwa to Cisse: 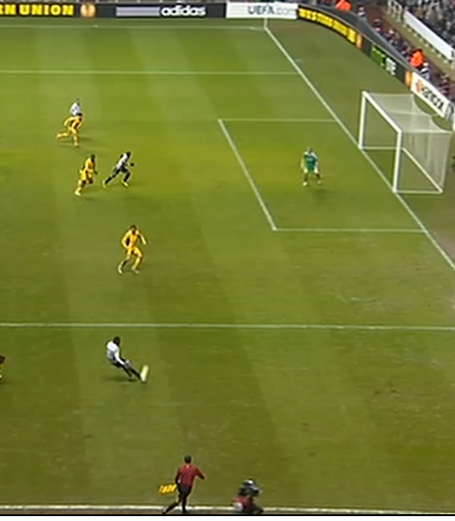 Here's where we use the "offside is a tough call to make when everything is moving so fast" excuse for the official. Cisse is moving at a high rate of speed here. He began his run at the top of the 18 yard box, and in the time it takes Mapou to take a step and swing his leg through the ball, Papiss has taken 4 or 5 steps and passed all three of the defenders shown here. It's a brilliantly timed run, even if he is offside. I have no idea how the linesman makes this call in real time. Honestly, if you made me choose on or off with no wiggle room, I'd probably say off. We can use the stripes here again, and it appears as if his knee is just barely on the other side of the defender. Then again, maybe not, and if we're being that nitpicky, the feed is paused a split second after MYM strikes the ball. We're splitting hairs here.

That it's the second borderline call of the night (if you can even characterize the first one as such) predisposes us as fans to be upset about the call, even if these decisions are made independently. I'm not saying I wouldn't have been screaming about it if the first call hadn't been bungled; I would have. But I would have been able to go to sleep tonight if this was the only missed call. As it is, we'll remember this one in a few weeks as the one where we lost two sure goals to poor officiating. 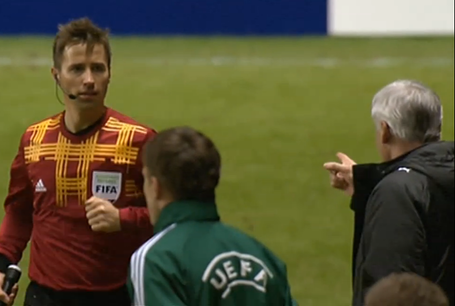