Hatem Ben Arfa Back In Full Training: Could His Return Help Papiss Cisse?

Hatem Ben Arfa will bring his creativity and attacking presence back to the Newcastle starting XI, but will his impact be felt by Newcastle's out of form striker?

Share All sharing options for: Hatem Ben Arfa Back In Full Training: Could His Return Help Papiss Cisse?

All statistical data and charts in this piece were compiled from http://www.squawka.com

Hatem Ben Arfa. At a certain point (you can check back through the archives and find it pretty easily) I was not an HBA believer. Those times are largely behind me now thanks to a combination of 1) a more well-defined roll for him within the offense, 2) a more well-rounded body of performance as a result of this definition and 3) my coming around as a result of these more well-rounded performances. With all due respect to Jonas Gutierrez and Gabriel Obertan, there has been a clear drop-off on the right side of the attack in Alan Pardew's newly minted 4-2-3-1 - even with Jonas' and Gaby's vastly improved performances over the past several matches. There should really be no surprise if and when he slides straight into the starting XI against Southampton.

I've spent some time over the last couple days looking at stats and heat maps and other things which are very useful to many people but which are admittedly somewhat like my command of the German language these days - I can understand a certain amount of German, but if I were to try to speak it now, it would be total gibberish. I have however (I think) uncovered reason for double-secret optimism for Newcastle with HBA's return. This is going to involve a number of pictures and some wild speculation, but bear with me. First off, just for posterity, let's take a look at an "action area" chart of former Newcastle striker Demba Ba: 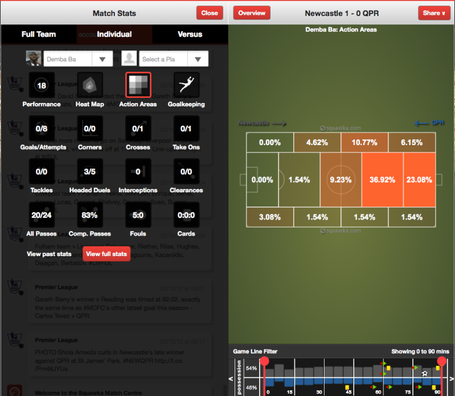 (click images to embiggen if you're having trouble reading the numbers)

This was a pretty typical match for Demba - 70% of his time was spent in the central channel in the opponent's half of the pitch. 21% of his remaining time was focused on the left wing (Jonas Gutierrez for 85 minutes, Sylvain Marveaux for 5 + injury time in this match). Hatem Ben Arfa was employed in a free role in which he ended up spreading his time fairly evenly across the attacking half (including time on the left) - but HBA's presence seemed enough to keep Demba from feeling the need to float to the right in any great measure. Jonas' propensity for tracking back, however, seems to have encouraged Demba to (on the few occasions when he wasn't directly in the center of the pitch) drift to the left.

Next, let's take a baseline reading for Papiss Cisse being asked to perform roughly as Demba Ba had been doing: 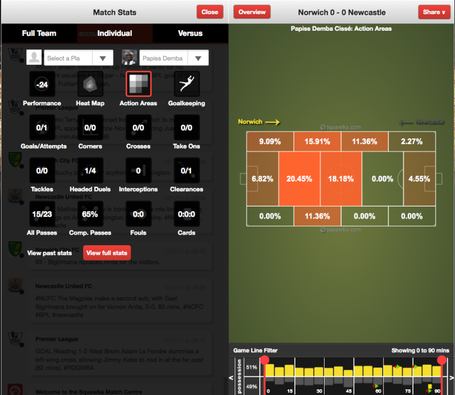 In the Norwich match, Papiss had Marveaux on the left and Obertan on the right - while he did spend 44% of his time through the middle (although not nearly as much time in the opposing box as Demba Ba), he did feel the need to drift to the outside, notably to Obertan's side to the tune of 36% of the time from our box forward.

It must be conceded in terms of this discussion that Papiss Cisse and Demba Ba are very different types of strikers. Whereas Demba could function beautifully as a target striker and could corral high services and create chances from them, Papiss requires rather a more direct style of service - so comparing the two is a slightly Orange/Tangelo comparison. Ultimately either way, however, they should positionally be mostly similar when playing the advanced striker role in a 4-2-3-1.

The January window saw the purchases of many players, but most notably for terms of this discussion, Yoan Gouffran. Gouffran's impact on Cisse and his positioning on the field is immediate and striking. Whether it's a matter of Cisse's trust for Gouffran on the left hand side v. his trust for Marveaux or Jonas or if it's an alpha striker thing, he ceased drifting to the left completely and concentrated his play very centrally: 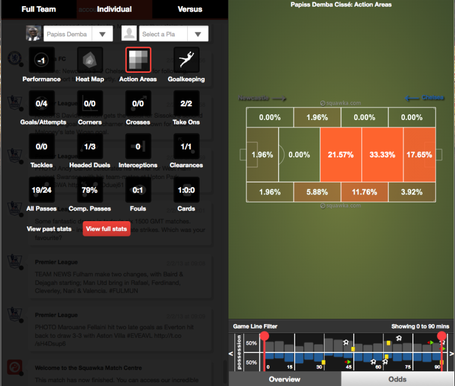 Let's take a look at Papiss in the Spurs match. Perhaps this positioning thing is a fluke, right? 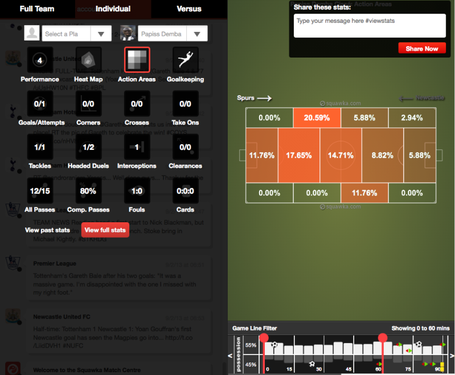 This is the first 60 minutes of the Spurs match (you may recall that Yoan Gouffran was forced off at the hour mark through injury) - behind him in this match were Gouffran -- Sissoko -- Jonas Gutierrez. Once again, Papiss has 0% activity on the attacking left while Gouffran is on the pitch while drifting to Jonas' side on a fairly regular (but somewhat lesser) basis. When Gouffran was substituted, Sylvain Marveaux came on - what do we see in the final half-hour of this match? 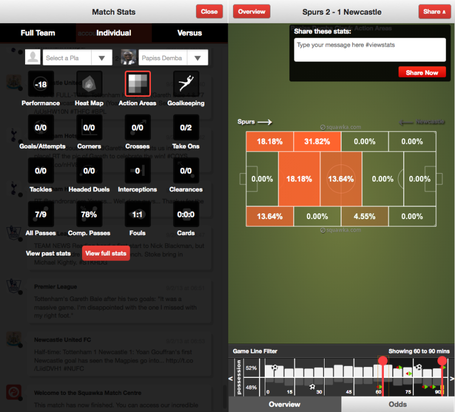 Three things immediately stand out on this particular chart - first (and most disturbingly), Papiss Cisse spent 0 measurable time in the Tottenham box. In fact, NO Magpie spent measurable time in the Tottenham box save for Shola Ameobi (16.67% of his 5 minutes). More pertinently, Gouffran's withdrawal and Marveaux's insertion did seem to have an affect on Cisse's positioning - and his drifting to the right more than doubled.

Finally to the point - there is significant hope with the reinsertion of Hatem Ben Arfa into the lineup on the right hand side that Papiss will feel compelled to concentrate primarily on his play in the center of the pitch. Add in the fact that you then have both Gouffran and HBA who can create their own shots and the additional fact that you then have Cabaye, Sissoko, HBA and Gouffran who can find the type of pass that Cisse craves and you are left with a sneaking hope that he will be coming out of his poor goalscoring form sooner rather than later.

What are your thoughts? Do you have hope that HBA's return will bind Cisse into the center and round him into goalscoring form? Let us know below!