Should Newcastle go for it in Ukraine or play it safe and concentrate on the league?

Newcastle United travel to Ukraine to take on Metalist Kharkiv in the second leg of Europa League Round of 32 play Thursday. The first contest at St James' Park was mired in controversy as two Papiss Cisse goals were ruled offside, even though replays showed that one (if not both) was clearly the wrong call. This is a five-point match preview.

If you haven't already, check out Jim's and 51dimes' introductions to Metalist Kharkiv. The former is a history of the club with lots of cool anecdotes, and the latter gives a look at their season so far. Otherwise, all but the newest of Toon Army recruits will remember Metalist (Hi, #Jagpies).

As we expected, Jonathan Cristaldo and Xavier had the most influence on the Ukrainian attack. Willian provided an injection of confidence when he was inserted into the match, though he and Cristaldo both seemed determined to perpetuate the "Brazilians are floppers" stereotype. The player who had the most impact on the match, however, was without a doubt goalkeeper Oleksandr Goryainov. He was massive all day long, even if he did get beaten twice. He had complete control of his defense, and in return, his center halves effectively funneled play to the outside. In order to consistently put pressure on Goryainov's goal, Newcastle will either have to unlock a path through the middle (Hatem Ben Arfa?) or find a way to make their crosses connect (if only Yoan Gouffran wasn't cup-tied!).

Is it fair to judge a whole fanbase or a whole city based on the actions (or printed publications) of one ultras group? No. So I guess I'm being unfair when I suggest that the atmosphere is not going to be terribly friendly based on these cards left around Newcastle when Metalist came to town: 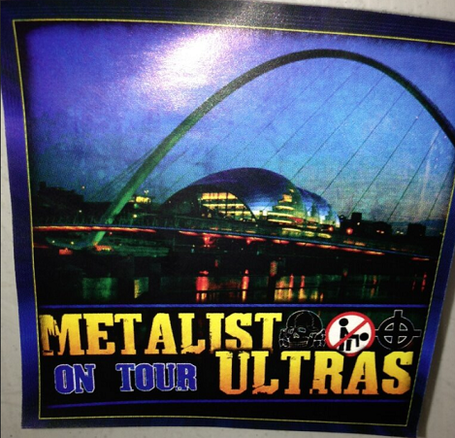 There's got to be a lot of cognitive dissonance going on when you represent yourself using a racist symbol, yet the team you support is full of people with a darker skin color. Let's just move on before it gets preachy up in here.

Earlier this week, Jim took a look at how Newcastle could go about balancing the desire to advance in Europa with the need to achieve a result at Southampton, and he basically came up with a first choice for the Premier League match, leaving the rest to start in Ukraine. It's a plan that makes sense, and it's even plausible. After giving this quite a bit of thought, however, I've just about convinced myself that this fixture is worth chasing with a fairly strong selection. We've seen the numbers. With the caveats that (a) nothing is guaranteed and (b) one of the many lessons from 2008-09 is that nothing should be taken for granted, we nevertheless realize that it's not likely at this point that Newcastle will find themselves relegated at the end of the season. The difference between 14th and 17th place is a larger cut of Premier League TV money...and that's it. The upside to winning the Europa League, while less financially rewarding, is a trophy.

The desire to compete for a cup will always be inversely proportional to the perceived ability of the club to legitimately compete for the trophy. The Round of 32 is quite a long way from silverware, but who lies in wait should Newcastle advance? Likely Anzhi Makhachkala, but maybe Hannover 96. Not pushovers, either of them, and Anzhi represents yet another trip to the former USSR in the middle of the season, but either is a winnable matchup for the Toon. All of sudden, we're talking quarterfinal. It's not as simple as all that, of course, but the road is easier with a few veterans in the lineup. How do we feel about mixing in a few senior players?

What Needs to Happen

Since Newcastle didn't allow any away goals last week, they have the advantage. A 0-0 draw will necessitate extra time (followed by penalty kicks if both teams still fail to score), but a 1-1 draw or higher will result in advancement for NUFC after 90 minutes - no extra time necessary. The whole scenario makes Metalist's obvious desire to play for a draw last week especially puzzling, and it makes me doubt their ability to muster a heroic comeback should the Magpies put themselves in a position to win. In short, a Newcastle goal dramatically increases their odds. I like Pardew to deploy an aggressive tactic, knowing that an early goal will put pressure on the hosts. Even if they are burned on the counterattack, an equalizing goal is all they'll need.

As I noted earlier, the other side of the bracket is contested by Anzhi Makhachkala and Hannover 96. Christopher Samba no longer plies his trade for the Russian side; he's at Queens Park Rangers now. However, the club still benefits from the services of Samuel Eto'o, who has scored 15 goals in 29 matches this season, 8 of them in Europe. They are up 3-1 on the Germans heading into Thursday's actions, but 96 are quite formidable at home. I'm personally rooting for Hannover, if only for the shorter travel in March.

Of course, Newcastle have to take care of business first. If they don't, it means a lighter schedule and full concentration on the league. It also means no more European competition for at least another year, which is why I'm hoping for a strong effort Thursday.