A bit of elementary education for our newbies.

We've had an influx of new Newcastle supporters on the blog recently, thanks to a Twitter movement most of our regular readers will know little about. If you've never watched a Newcastle United match before, don't fret. While there's no way we could possibly get you caught up with the entire sport of football, the 121-year history of Newcastle United, or even the current state of things, we'll try to answer some of the more common questions that we get from newbies so that you can enjoy the match with minimal confusion. We've also got a series of primers that will help you get to know the sport, the league, and the team, so check them out as soon as you're done here.

You should know that today's match is not a Premier League match, which should be obvious once you realize they're playing in Ukraine. Right now Newcastle are competing in the Europa League. If you're familiar with the World Cup, it's a similar format, except a bit more complicated and stretched out over the course of a season. Today is actually the second leg of their current matchup, which is in the Round of 32. The scoring is aggregate, so the total score of both matches is what will determine the winner. The last match ended 0-0 (though there was some controversy), so it's pretty straight-forward. The tiebreaker is away goals, so if tonight ends in a 1-1 draw or higher, Newcastle win. A 0-0 result means 30 minutes of extra time (no sudden death, or as it's known in footy, golden goal) followed by penalty kicks if necessary.

Lineups are announced 1 hour before the match starts. If you're on Twitter (or checking out our game thread), you'll see a short-hand notation that should tell you where each player will be lining up. The lineup always starts with the goaltender and works toward the striker, moving left to right. So this: 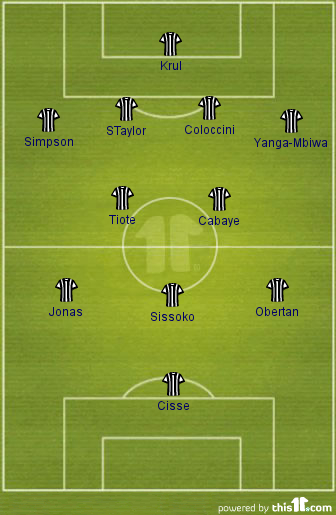 (or with semicolons instead of |)

Arguing about lineups and how subs will/should be used is a ritual of sorts, and the lineup announcements are like the unofficial start of festivities leading up to kickoff.

Have fun today, and don't be afraid to ask questions. We're a pretty understanding bunch, and the majority of people who frequent the comments section have been in your shoes. Howay the lads!