Here are your "Papiss Cisse in a Wonga Shirt" Photos

Papiss Cisse finally appeared in public wearing a Wonga shirt, so it's only right that we have a little fun.

Share All sharing options for: Here are your "Papiss Cisse in a Wonga Shirt" Photos

The Papiss Cisse vs. Wonga feud was officially put to an end Tuesday when Cisse took to the pitch wearing the payday lender's gear in Newcastle's 2-0 victory over St Mirren. The prolific striker had held out for part of the club's preseason training camp in protest over the company's new shirt sponsorship, citing his Muslim faith's opposition to usurious practices. About a week ago, Papiss acquiesced and returned to training. The reason for his sudden attitude reversal was not made public, though the club wanted us all to know that no money changed hands, which is good because (insert your own interest joke here).

The conclusion of it all is that Cisse will now carry on making his living kicking balls while the rest of us watch and applaud, and he'll do it wearing the logo of a company he ostensibly doesn't support. Thus the big story of the day was not the goal he scored on his return, putting to rest speculation about rust due to a lost week or so of training. Instead, Wonga got a lot of free publicity on this day, as reporters showed up to take pictures of Cisse wearing his sky blue badge of shame.

It's understandable. In the absence of any real transfer activity on Tyneside, this was THE STORY for a good while. It had a good run, but honestly the story is a bit stale by now. So, we might as well have some fun with it. The best caption/photoshop job/image macro using one of these pictures gets 5,853 Internet Points. I'll start (you can and should do better than this): 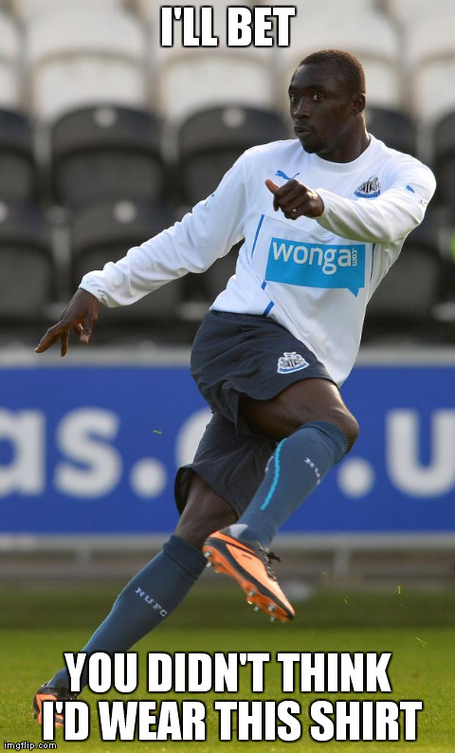 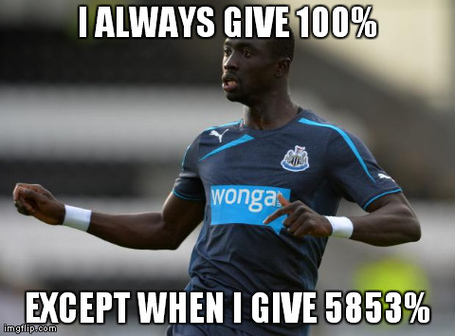