Post-mortem. Hyperbole? Ehh. Not this time.

In the Alan Pardew era, there have been ups and downs, successes and failures.  One thing has been constant, however: getting absolutely mauled by Manchester City.  Not just mauled, mind you.. looking like an under 8 team trying to play... well... Manchester City.  And so, even though it's a new season and optimism and all that, I took my seat at the pub fully cognizant of what was about to transpire.  Knowing that someone is going to punch you in the junk doesn't make it feel any better, though.  As I said on twitter during the match:

Fortunately, City took their foot off the pedal in earnest early in the second half, even though they scored again after they had done so... but it could have been so much worse.  A look at the heat map shows about what you'd have expected to see... one way traffic: 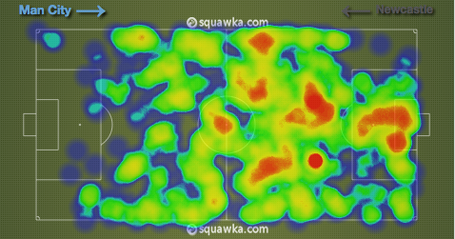 (For more stat-related goodness from this match, go to Squawka.com and check it out.  It's worth it.)

Much like a doppler radar weather map, the red areas above are the areas in which Newcastle United spent the most time with the ball.  Typically for an Alan Pardew Newcastle side v. Man City, these are all concentrated in the defensive half of the field.  Well... except for right in the middle of the center circle.  I suppose that's probably red because we spent so much time kicking off.  The heat map really tells most of the story (it can't tell you how stupid Steven Taylor was or how afraid the rest of the squad was or just how isolated Papiss Cissé was in the second half...)

Want a different way to reinforce that, contrary to Alan Pardew's assertion that we "frettened the goal" at any point during the match we in fact did not?  We'll ignore the stats that show Newcastle United possessed the ball between the top of the Man City box and the touchline for 4 minutes and 36 seconds.  The team dashboard from the StatsZone App (if you don't have this... shame on you!) tells exactly the same story as the heat map above. 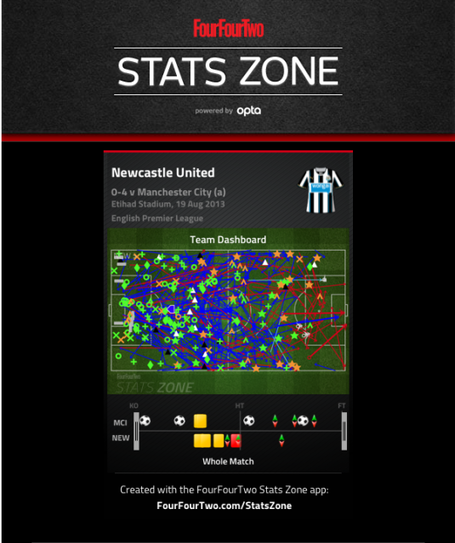 In the Alan Pardew era, matches against Manchester City have been statistical outliers, or at least non-indicative of the general form of the club.  Remember the beginning of the 11/12 season when Newcastle United was one of two remaining undefeated teams in the Premier League team heading into the match against Manchester City (the other undefeated team)?  Thumderdome!  It was exciting and anything was possible, right?  It was... including a typically limp Alan Pardew performance and a 1-3 reverse.  For whatever reason, Manchester City is Coach Red Beaulieu to Alan Pardew's Coach Klein- post stealing of play notebook):

Matches against Manchester City in the Pardew era:

That's a total of 19 goals against in 6 matches.  0 minutes of looking like Newcastle even belonged on the same pitch as City.  Ultimately, there has been and will be more hand wringing and concern in the Toon Army.  There are very real questions to be had.  Making any decision based on a Man City/Newcastle United match under our current manager, however, will not tell us anything useful so far as exactly where or what this squad will be.  We must pick ourselves up, dust ourselves off and see what happens on Saturday against West Ham before we have any real idea of where this squad is mentally and physically.