Was there anything positive to take from the goalless draw at St. James' Park?

Let's be honest - a 0-0 draw home to West Ham was not the tonic required to ease the ills from the opening match loss to Manchester City.  Far from it, in fact.  Piled on top of the frustration of Bedo Fif's inactivity in the transfer market, the result itself was more like trying to put out a dumpster fire with a gallon of gasoline.  Largely, the negatives from the match were known quantities.  That the attack was toothless was not entirely surprising - the depth of the futility was disturbing.  Once again, when all else fails, the club hope for Hatem Ben Arfa to pull a magic moment from his backside and he is more than willing to try to oblige as portions of the match devolve into a 1 v. 11 exercise.  The takeaways from the match ran the gamut - completely unacceptable to encouraging - but credit to Alan Pardew for changes in lineup and formation is tempered by the feeling that it was only done because he was missing two of his favorites through injury.

Alan Pardew ran out a 4-4-2 of sorts in the absence of Cheik Tiote and Jonas Gutierrez... wait, wut?  Given that Jonas and Tiote are directly replaceable with other players within the squad, it seems unlikely that the formation shift was in response to these injuries. In fact, for better or worse, the idea of shifting to the 4-4-2 was clearly a vehicle to get Shola Ameobi into the lineup in an attempt to either give Papiss Cissé some forward support or the club an additional attacking option.  Whether or not that actually occurred is debatable. 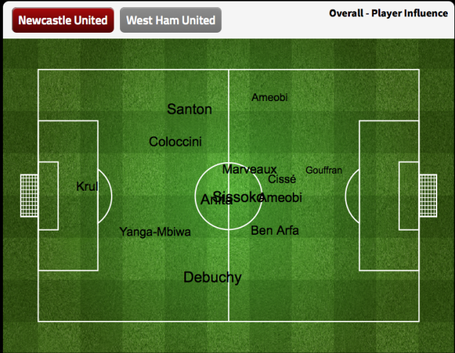 As you can see, the insertion of Shola up top served to push Cissé even further away from goal while Shola himself didn't occupy a very advanced position in his 90 minutes.  In fact, it took the introduction of Yoan Gouffran for Papiss in the 72nd minute for Newcastle to register a relatively forward presence at all.  Gouffran, of course missed Newcastle's best chance of the match off the rebound of Sammy Ameobi's shross which hit the post late in injury time, but that was not the only involvement Gouf had in the attacking third.  The next two images will compare Cissé's involvement to Gouffran's involvement: 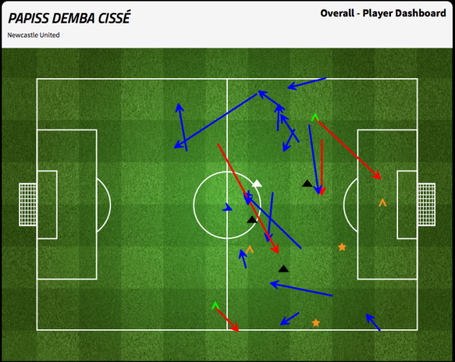 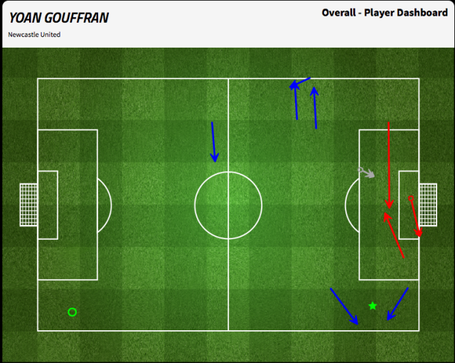 Frequently, you will see strikers dropping back when they are not getting service - and this was definitely a case of that.  It was noted during the live thread for the match that Cissé looks to have lost that fast-twitch reaction that he had so well when he joined Newcastle - as if he's not expecting the passes to come.  In fact, you won't find any player passing to Cissé in the top 20 player-to-player combinations for Newcastle in the West Ham match.  Deconstructing Cissé is a matter for another day, however.

Oh, and Shola? His number one pass provider was Tim Krul.

In several ways, the midfield setup was one of the more encouraging things about the "new" formation.  The pairing of Moussa Sissoko in a deeper role and Vurnon Anita was one that many had been thirsting for at least since Alan Pardew's misguided Jonas Gutierrez/Cheik Tiote central midfield v. Manchester City.  Sylvain Marveaux's presence on the left of the midfield was greeted with a similar excitement.  Ultimately and unsurprisingly, however, Marveaux and Hatem Ben Arfa functioned in a way much more fitting of attacking wingers (mostly because, well.. they're attacking wingers and all) turning inside on the attack instead of regularly challenging the fullback to get toward the corner.  Combined with an apparent edict issued from Alan Pardew to Davide Santon and Mathieu Debuchy to stay home (for the first 60 minutes or so, at least), Newcastle were extremely narrow. 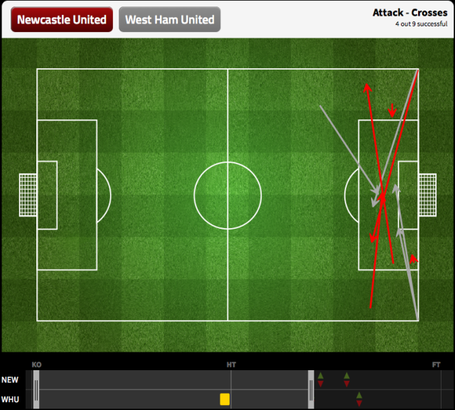 crosses in the first 65 minutes 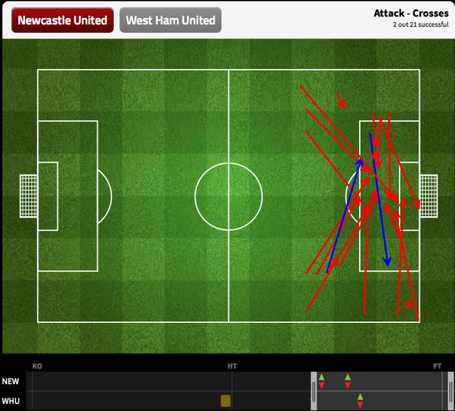 Sissoko and Anita showed glimpses of being a highly serviceable duo in the middle of the park, but frequently in a way contradicted by the formation.  The player influence map shows Sissoko slightly more advanced than Anita (and their player dashboards show much the same) but both hugging toward the middle.  Largely we got away with playing so narrow through the middle due to the fact that Marveaux and Ben Arfa were playing inside so much (as a matter of fact, more than once Ben Arfa could be seen playing almost a deep-lying playmaker role he was so far back and central) as well as Cissé and Ameobi dropping back as far as they did.

Our reluctance to attack hid fundamental problems with regard to player selection relative to tactics.

There were takeaways from this match.  At the point when Alan Pardew inserted Sammy Ameobi and effectively shifted the formation back to a 4-2-3-1, you can see we began attacking with more vigor.  One has to wonder what would have happened had the 4-2-3-1 been employed for the entire match.  It would be oversimplifying to suppose that the lack of attack is purely down to formation and exactly why we magically started attacking in the 65th minute is a question that needs to be asked.  Drawing at home happens.  Dropping points to West Ham is not the end of the world.  We can't and won't be relegated after the second match of the season.  There are questions relative to formational tactics that need to be asked of Alan Pardew however.