Newcastle United is the best club in the world to support. Here's why.

Ed. note: Alan Hoffman and Jim McMeachin also made significant contributions to this article. If there were a way to include three people on the byline, we would do it.

NBC Sports has signed a record distribution deal with the Premier League that will ensure that every single match of the 2013-14 season will be available for legal viewing in the United States, which is a huge step for the sport in a country that has been slow to adopt it, to say the least. Football is gaining momentum in the States, however, as this new TV deal indicates, and NBC is hoping it can convert new fans. New fans typically need a club to root for, and they've helpfully stepped in and created a web app that can tell users who their team should be based on answers they give to questions like, "Who is your favorite Pirates of the Caribbean character?" They're also planning on airing an ostensibly slightly more serious program tonight on NBCSN at 7:30 pm ET that should help new potential Premier League watchers make an informed decision. It's a good idea, but a 60 minute program gives each club 3 minutes (assuming equal time given to each one, which good luck with that), and that doesn't count commercials.

As Newcastle fans, we wanted to make our case that our club is the one new fans should jump on board with, and we wanted more than 2 minutes to do it. What follows is a one-sided, totally biased guide explaining why we believe Newcastle United is the best club in the world to support.

If there's one thing about Newcastle United that sets apart from all of the other football clubs in the country, it's the fanbase. Newcastle supporters, collectively known as "The Toon Army" because of the way Geordies pronounce "town," are rabid, crazy, and, most importantly, loyal to a fault. When the team was relegated to the Championship for the 2009-10 season, supporters didn't turn their backs on Newcastle, but instead consistently filled the 52,000-seat St James' Park and drowned out their opponents' support during away matches, despite the consistently long trips to other grounds. Even in the Premier League, it's not entirely uncommon to hear the "Toon, Toon" chant, among other fantastic Newcastle songs, fill up London stadiums while the home support sits on their hands.

The community is so tangibly invested in the success of Newcastle United that the overflow of passion and fire is simply a natural reaction.

Plenty of teams have great fans. Newcastle's stand above the rest, because the football club is engrained into the identity of this working class town. The community is so tangibly invested in the success of Newcastle United that the overflow of passion and fire is simply a natural reaction. Watch this goal by striker Papiss Cisse, a 90th minute winner against Fulham last season, as well as the subsequent reactions by the player, manager, and fans, and try not to smile:

Former #9 Alan Shearer (see below) put it best when he said,

People are very proud of Newcastle, very proud to come from here. This is a working class City and they just want to enjoy themselves and live life to the full. They work all week, pick their wages up at the end of the week and they spend it over a weekend by having a good time and watching the football. That's our life.

By the way, here's Cisse and some others heading into the crowd to celebrate after the goal above. They get it.

The Most Exciting Players in the League

You've already met Papiss Cisse. You thought that goal was decent? It was, but it's not even in his top 10 goals scored in a Newcastle shirt. The order of numbers 2 through 10 are completely debatable, but there's no question about which is the best:

This goal was so amazing that The Daily Mail ran a graphic about it the next day. Cisse, as it turns out, isn't the only Magpie that can defy physics (as with most football highlight videos, you may want to be quick on the mute button):

That's Hatem Ben Arfa, who led the league in take-ons by a large margin last season, despite missing not insignificant time due to injury. The Toon also benefit from the service of Yohan Cabaye, who has terrific vision and can place a perfect through ball from 30 yards. Neither I nor any other Toon fan are delusional enough to believe that Newcastle possess the deepest or best squad in the league, but on any given match day, this collection of players has the potential to generate the most mind-blowing of moments. If you squint hard enough, you may be able to see shades of The Entertainers, the Newcastle team of 20 years ago that took the league by storm with their electric brand of football.

A User's Guide to Newcastle United 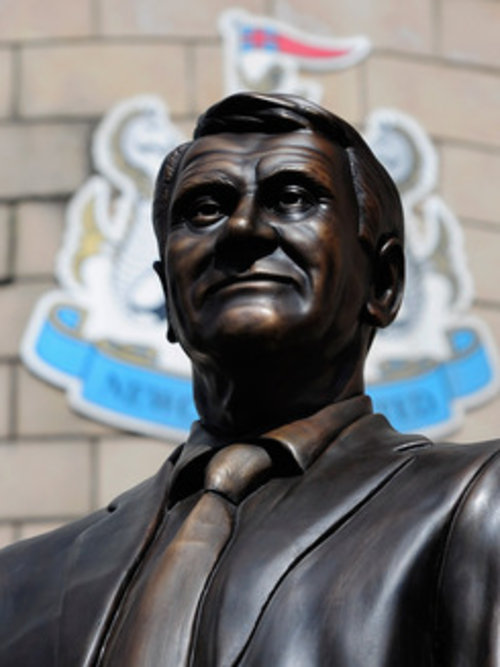 For a more in-depth discussion of Newcastle United's history and an exploration of how the Premier League works, check out our series of primers designed for new fans.

Newcastle has some pretty compelling history. Joining the Toon Army definitely feels like becoming part of something greater than the individual self. Newcastle West End and Newcastle East End joined together into one United club in 1892, and though much has changed since then, just as much has stayed the same. The new club settled on wearing black and white stripes (East End wore red and white, while West End's choice of shirt was rather inconsistent), and they have remained a defining part of the home kit ever since. United have played in St James' Park since their inception, and the park continues to be one of the best places in the country to watch a match.

There are some pretty cool stories associated with each of those aspects of Newcastle's history, but they are not unique in and of themselves. There are other United teams in England (though none are in the Premier League, despite what you might think based on certain clubs' chosen nomenclature), and many of them are old and still play in their original stadiums.

Newcastle, however, has some very cool traditions that are all their own. For example: The #9 shirt.

In the same way that a city's identity can be wrapped up into a football club, the club's own identity has been largely defined by a single jersey number. From the earliest days of numbering jerseys in the Football League, the number 9 has been that number for Newcastle United. Until the early 1990s, positions on the pitch dictated jersey numbers in football - and the number 9 was designated for the center forward, the man paid to put the ball in the back of the net. In many sports, a number can be identified with a particular player, (Anyone happen to know what number Brett Favre wore? Michael Jordan?) but the numbering system gave the number 9 shirt the opportunity to become transcendent.

Given that a number 9 is charged with the duty of scoring goals, it's very small coincidence that the best years of the club have coincided with their greatest number 9 shirts (Gallacher, Milburn, Shearer) - scoring more goals than the other guy is the point. But in Newcastle, the number 9 is bigger than the player. The number itself carries the weight of the entire Geordie public with it. When it is filled well, the spirit on Tyneside is buoyant.

Newcastle United's history is filled with cult heroes, and many of them wore the #9. There are others, like Sir Bobby Robson, manager of the club from 1999-2004, who was born a Geordie, married a Geordie, and spent 50 years away from Tyneside before coming home to lead his hometown club out of the depths, along the way establishing the Bobby Robson Foundation for cancer research before succumbing to the disease himself. There are other giants (Hughie Gallacher, Jackie Milburn, Alan Shearer, Kevin Keegan, and many, many others) on whose shoulders the club currently stands, and that's part of what makes it so great. When you join - no, inherit - Newcastle and put on the black and white stripes, you do so alongside all of those legends.

There truly never is a dull moment with this club. Sure, you can play it safe and go with Manchester United or Manchester City. You could play it dull and pick a side like West Ham and be guaranteed a mid-table performance. You could live dangerously and pick Norwich City who have somehow stayed in top flight for three years or Premiership newcomers Hull and live the "excitement" that is the relegation fight, but we know from experience: the relegation fight is not exciting. It is hellacious.

Or you could pick the side that could literally do anything this year or any year. Could Newcastle challenge for European qualification? Why not! They've got some exciting strikers up front and surely injury troubles won't be as bad this year. Could they completely crash and burn and get relegated? A distinct possibility! Joe Kinnear is running things, after all. Could they supplant West Ham and finish 10th? Yes! Will that be a success or a massive disappointment? Also yes!

Cheik Tiote helps Newcastle complete a comeback against Arsenal in 2011. The Toon were down 0-4 at halftime and came back to force a draw.

This is a side that could run out and play with your Manchester Uniteds for 90 minutes and get a point (or even three) off of them one week and then look totally disinterested against Crystal Palace the next. It's a team that could score 4 goals against Southampton one week and need a last gasp winner to beat Fulham the next. Sometimes supporting clubs is compared to riding a roller coaster. If Newcastle were an actual roller coaster, you might need to sign a waiver to ride it.

I don't know why there are live alligators on the ride, but they add to the experience. Roll with it.

Does this make you want to support Newcastle? I don't know. I support Newcastle because there is not a dull moment with this club. NUFC even took silly season to the silliest of extremes by seemingly trying to not sign anyone while getting into a dispute with its best striker over sponsorship issues. And yes, it's frustrating and sometimes you want to go, "To hell with it! I'm supporting a boring club like Fulham!" but then the club does actually sign someone and you get this goofy little grin on your face that makes you think, "Maybe...."

Look, supporting Newcastle isn't going to be rainbows and lollipops. But it is a lot of fun, in that weird way that only a club you devote yourself to can be fun. There will be frustrating moments and trying times, but then there will come the breakthrough...a big goal, a big win and all the troubles just wash themselves away.

We're all biased here - obviously. We love Newcastle enough to spend our free time running a website dedicated to the club. It's hard for us to imagine any other way to enjoy the Premier League, except as a member of the Toon Army. There's no other way to experience football quite like this one. Hope you're ready.