In Premier League football, patterns develop sometimes. Newcastle United don't win at Old Trafford, for instance. Also, you can count on this book featuring prominently twice a season for Newcastle. Apparently you can add to that list: Martin Jol will bring Fulham to St. James' Park with extremely negative tactics, hoping to steal a road point, but will be foiled by a last gasp moment of brilliance from Newcastle United.

Fulham Park The Bus From Minute One

Possession and passing numbers look better for Newcastle United in this match. For instance, following the West Ham match which featured 51 "long passes" from Newcastle United, this match saw only 24. This is perhaps due in no small part to the fact that Fulham chose not to put very much pressure on Newcastle when they were in possession. In fact, Martin Jol had clearly instructed his team to sit back behind the ball - every now and again leaving one player out somewhat close to midfield in a half attempt to play on the counter. The heat map from the match shows you pretty much what you need to know here: 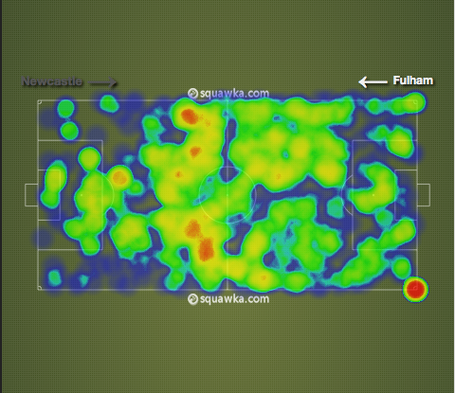 This graphic would be even more striking if we were effective in the attack at all - but alas as you'll see below this was another match where Papiss Cissé's player influence position was further withdrawn than Shola Ameobi's - again indicating that Papiss is looking for something he is not getting from Newcastle's midfield. (Also notice the advanced position of Newcastle player influence v. withdrawn player influence of Fulham) 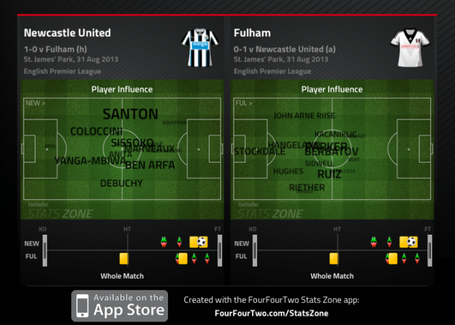 This, the accurate graphic, has been inserted to actually refer to the match that just took place.  It was the Jim's intention to visually compare this match with the last visit of Fulham to St. James'... he just didn't do it.

The graphic below was the original graphic included in this article, but is in fact from the spring.  Although some names have been changed, graphically the matches were quite similar.  Jim just needs to be more careful in the editing process.  --Ed. PS - Thanks, Phil! 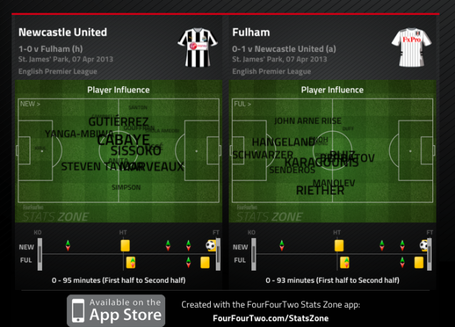 The introduction of Yoan Gouffran would provide (as it did against West Ham) a player willing to play in the final third with regularity - for better or for worse on the back of his missing a second gilt-edged chance in as many weeks. The introduction of he, Yohan Cabaye and Loïc Rémy would not have the pronounced post-65th minute bump in attacking that we saw in the West Ham match in quantity, but it is indisputable that the attack became more incisive and interested following their introduction. For a long time leading up to the goal, it had every look that Hatem Ben Arfa had taken a mind to salvage the match for Newcastle and his teammates were very much happy to allow him to do so - and this time it paid off.

The Rest Of The Story

Much has been made of Newcastle's run of three consecutive clean sheets while Steven Taylor sat out his 3 match straight red suspension collected in the Manchester City match. Without doubt, the back four of Mathieu Debuchy, Mapou Yanga-Mbiwa, Fabricio Coloccini and Davide Santon have established themselves as first choice... it will be telling to see if Steven Taylor is re-inserted into the starting lineup for the Villa match after the international break with Mapou Yanga-Mbiwa as things sit at this point will not feature for France in their World Cup Qualifiers this time around.

In all fairness, Fulham did not ask a great many questions of the Newcastle defense, but when they did the back five (including Tim Krul) were well up to the task. 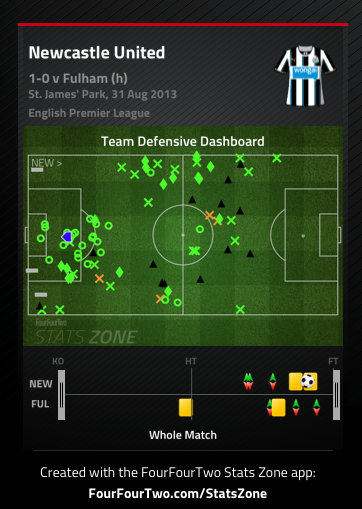 The green marks on the graphic above are the marks of success. Each green X indicates a successful tackle (failed tackles are goldenrod); each green circle indicates "Clearance- Possession won"; each green diamond indicates a pass interception. Really the only misstep for Newcastle defensively is that blue tab right near the penalty spot. You may remember that moment from the heart-in-throat moment it created for Newcastle. It was the defensive error that led to Adel Taarabt's shot late in the match which he thankfully hit straight at Tim Krul. One more thing about the defensive graph here - all the black triangles? Those are fouls suffered by Newcastle defenders. All the white triangles indicate fouls committed by Newcastle defenders. Our defenders were resolute, sure tackling and not committing fouls to provide Fulham the moments they were looking for - set pieces for minimal risk chances on goal. (Yohan Cabaye's foul that led to the free kick chance would appear on the attacking graph as he is for stat purposes an attacking player).

Fulham didn't come with the idea to press Newcastle or take very many risks at all in attempt to score goals. They parked the bus from the word go and were going to be pleased to take a dour one point away from St. James' Park. When they did attack, Newcastle had them well in hand. While largely ineffectual on the attack yet again, Hatem Ben Arfa did manage to find that stash of bottled lightning that he keeps for just such an occasion to earn an important three points for Newcastle United (which makes us forget the moments where he was perhaps slightly detrimental to the offense).