Saturday saw the return of the triumphant return of the 4-3-3 formation and three points taken from Villa Park. Let's see what we can see from this match.

I'm not going to lie.  Although I am fond of the folks over at 7500 to Holte, I hold the same special place in my heart for Aston Villa that many Toon fans do.  As such, I was thrilled to take 3 points away from Villa Park.  My only regret is that this match has happened so early in the season.  If you've been around the site for a while, you know why this is.  At any rate, we've got 3 points and WAY-too-early-reaction guy gets excited because we're only 3 points off the top of the table.  Hey- if Alan Pardew didn't consistently mail it in against Manchester City, we could maybe be in a European spot... or not really.  3 goals from 4 matches isn't going to win you any GD* contests.  Enough of the niceties, let's get in and learn something from this match.

There is a camp among the Toon Army who feel that Alan Pardew started our strongest possible midfield in the form of Moussa Sissoko, Vurnon Anita and Yohan Cabaye.  The question with these three was a matter of deployment - who would draw the holding duties, would Cabaye be played in a deep-lying role and Sissoko in the attacking role we've come accustomed to seeing Alan Pardew using him in?  In terms of the Aston Villa match, the answer to the last question was: not really.  As you will see below in the heat maps, Yohan Cabaye was almost exclusively employed in a more forward/attacking role than the other two.  Vurnon Anita was employed almost exclusively in a more holding midfield position.  Moussa Sissoko, far from the out and out attacking role he was asked to play in the 4-2-3-1, played a much more box-to-box role.  (Heat maps generated at http://www.squawka.com) 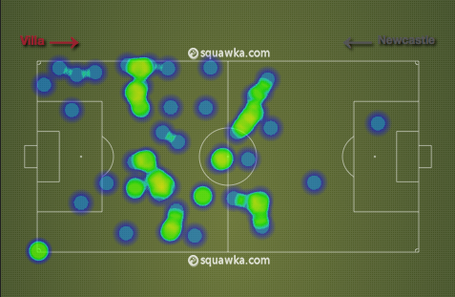 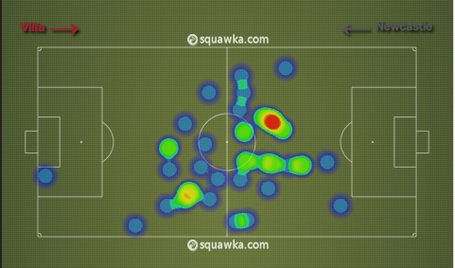 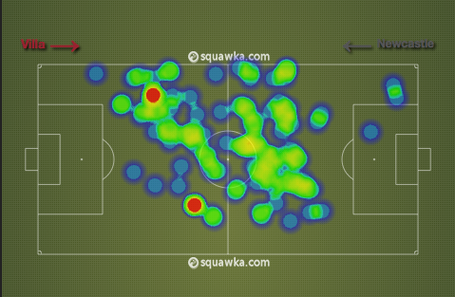 As Yohan Cabaye was being eased back into the squad, Moussa and Vurnon had formed an encouraging CM pairing, albeit in the guise of a 4-4-2 formation.  Both of them passed for at least 87% in the home victory v. Fulham: Moussa went 46/53 - 87% while Vurnon went 47/52 - 90% in only 66 minutes of play before being subbed off for the aforementioned Cabaye.  While changes in formation, opponents, opponents' tactics and other factors certainly influence statistical comparisons in non-quantifiable ways thus making pure apples-to-apples type comparisons difficult to impossible, it is interesting to see what happened when Yohan Cabaye was re-introduced to the Newcastle United midfield.  I mentioned on Coming Home Newcastle LIVE that I felt Cabaye's return had marginalized Anita to some extent (were you listening?) and the numbers somewhat bear that out.  From the 52 passes in 66 minutes against Fulham, Anita saw his total number of pass attempts drop to 34 in 73 minutes against Aston Villa.  This could be expected with a third midfielder there to soak up time on the ball and attempt passes, right?  Sure, but at the same time Vurnon's passes were going down, Moussa Sissoko's passing numbers went up to 57/66.  Also, with Yohan Cabaye in the match, you want him involved in the offense and thus taking passes from other midfielders, right?  Perhaps - but our French maestro (he's like a new signing, right?) found it difficult on the day to make the kind of impact that we would perhaps expect.  For the match, his passing numbers were average (if you believe StatsZone's numbers of 33/43) or just plain not good (if you believe Sqwawka.com's numbers of  31/46).  Perhaps we write this one up to rust, but we will need more than the 71.5% success rate passing (if we average the two sets of numbers), the 0 key passes/chances created from the run of play and the 1/7 crossing (one "key pass" on the corner kick to Debuchy that Mathieu put just wide) that we got from Yohan this time out.  The big question will be whether Cheik Tiote will be restored to the starting lineup as he rounds into full fitness - if it's in a roll similar to what Vurnon Anita did in the Villa match, it's going to be hard to argue.  Minimal time in possession/passing and primarily defensive positioning seems a brilliant recipe for Cheik being Cheik. 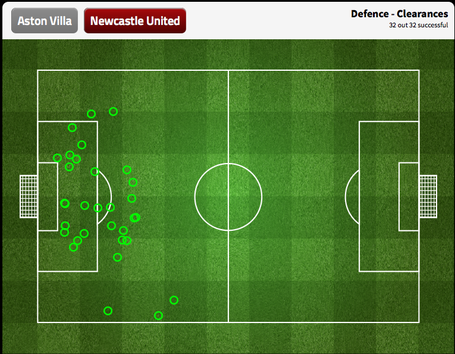 Once again, Newcastle's new preferred defensive line shone.  In this graphic from StatsZone's wonderful new web interface, you can see that they were 100% - 32 for 32 - in defensive clearances for the match.  This of course does not account for the Benteke goal or the chance that Agbonlahor missed badly as neither of those saw a clearance attempted, but gives a pretty good indication of the 90-some minutes of the match outside of those two breakdowns.  Individually, they were very good as well.  We discussed Mapou Yanga-Mbiwa on Coming Home Newcastle LIVE, and what you won't be able to see through any statistical number was the anticipation and positive play that he produced.  Multiple times he was a step ahead of Villa and thus able to stem attacking moves by jumping passes and being places before the ball got there (sounds easy, right?).  Mathieu Debuchy continued his ascendance of form, essentially locking down the right side - only 3 of Aston Villa's 17 crosses (plus corner kicks) came from his side of the field.  He was also 100% successful in tackles between the top of the 18 yard box and the end line.  Really the only question that the defense has to answer is: What happened with Christian Benteke's goal?  Tim Krul missed the corner badly, but both Benteke and Libor Kozák were wide open (granted in exactly the same spot) and either one of them could have scored that corner. 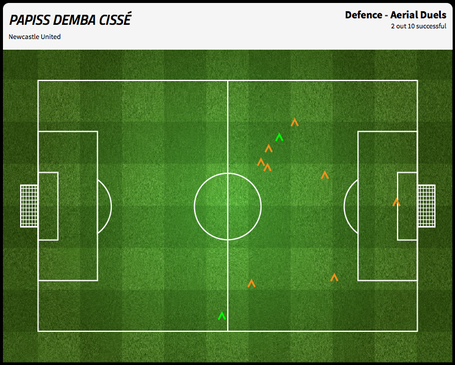 Papiss Cissé is not a target forward.  2 out of 10 successful aerial duels shouldn't need to illustrate this idea, but there it is.  Several of these are probably down to Fabricio Coloccini who for some reason was channelling his inner Mike Williamson and hooooooooooooofing... but the less said abut that, the better.  On the whole, Cissé is struggling.  His passing in the attacking third was poor (3 of 9), he had 1 shot on target out of four chances, and it was a tame effort from well outside the box.  As you know, there's not a whole lot of competition for spots up top, but we're going to need to see special magic 4-3-3 Papiss soon or else we may have to start calling for Shola Ameobi in the middle there or some other alternative.  Papiss - I'm still giving you the benefit of the doubt against my better judgement.

Stats have limitations and I struggle with them because of that fact.  Loïc Rémy had a heck of a match, creating positive and effective width as well as attacking options on the left even if a visual representation doesn't show it very well.  He certainly caused Matthew Lowton more than 12/14 passing, 2 shots (1 on target) and 2/4 take-ons worth of trouble.  We'll never know if he would have been positioned where Yoan Gouffran was to score the winner, but either way, we can safely say that he had a solid debut start and is likely to only get better.

I guess as the kids say, Ben Arfa gonna Ben Arf.  He passed the as many times as Vurnon Anita did if not quite as accurately (25/34), had the tap in to open the scoring off of some pretty brilliant off the ball movement, I must confess - if you haven't watched the MOTD view where you can see his movement for the entire move that led to that goal, you can get a pretty good idea from this .gif courtesy of 7500 to Holte:

The Ben Arfa-ites will also point to his 5/7 success rate for take-ons and his shot that was parried to Gouffran for the winning goal as further example that he should be allowed to do whatever he wants whenever he wants - which I somewhat disagree with.  The more objective look, however, shows that he was less Hatem-centric than I felt like he was during the match.  If we can continue to have a somewhat balanced "me first but not always" Hatem, I think we could be on to something here.   Put all of this together, and we've managed to put the 4-0 season opening loss to Manchester City in the rear view mirror in almost every way - save for goal difference - and are sitting in the top half of the table... for now.