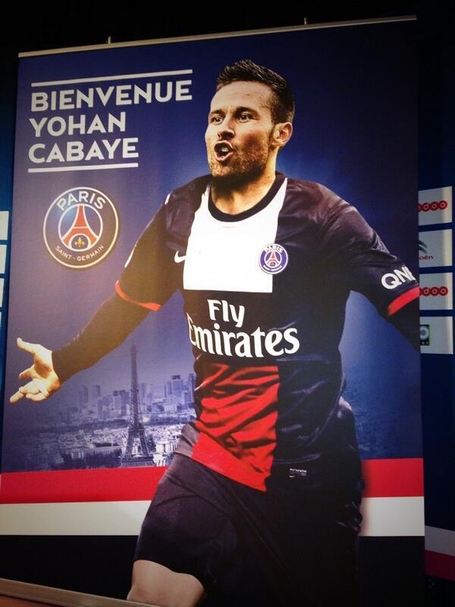 Cabaye said in his comments that he was "won over by the ambitious project at Paris Saint Germain." The press release on the Newcastle United website was a bit more blunt:

The Club wanted to keep him but the lure of Champions League football and the prospect of being involved in the sporting project at PSG was an opportunity that Yohan made very clear to us he wanted to take.

The fee for the transaction was officially undisclosed, but most media outlets have reported that the money changing hands is in the neighborhood of £20 million.

While that was going on, Newcastle were announcing their own arrival. Luuk de Jong passed his medical this morning, and now we have a picture of him wearing black and white.

The timing of the announcement was now doubt purposeful (and fairly shrewd). A striker on loan is no replacement for the best player on the team, but introducing a new face sends an understood message. So too does highlighting quotes from said player about wanting to be part of the club, something that couldn't always be said for Yohan.

In a somewhat interesting development, de Jong will wear the #18 shirt, which belongs to recently sent out on loan Jonas Gutierrez. Check out our profile of de Jong from when he was originally connected to Newcastle way back in 2012.