This week's Man of the Match rated just above a 6. This week also features our lowest-ever rating, which belongs to exactly who you think it does.

Newcastle United lost to Stoke City 0-1 on Monday, and we asked the community to rate each player based on their performance in the match. This week's results were predictably ugly. Brace yourself for carnage.

Quick note: You'll notice that every player received at least three "10" votes. (Surprisingly, we only had one person give everybody a "1.") I blame the mackems. In any case, those rogue votes didn't really do much to affect the means, but the standard deviations are kind of crazy. I've simply left them off this week. To get an idea about the spread, simply look at each player's chart. 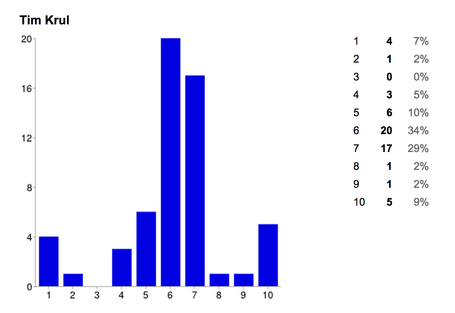 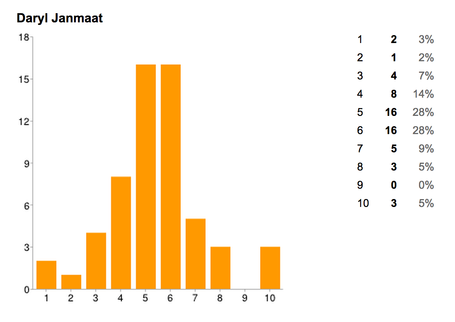 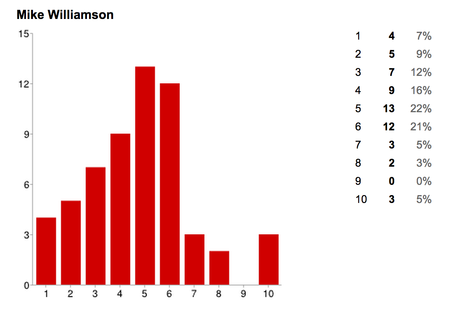 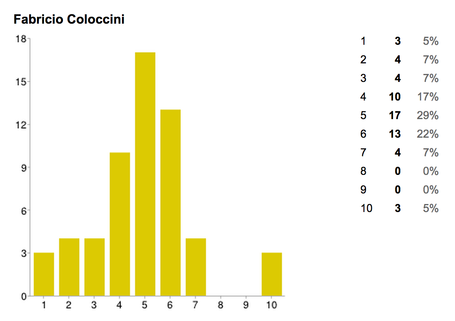 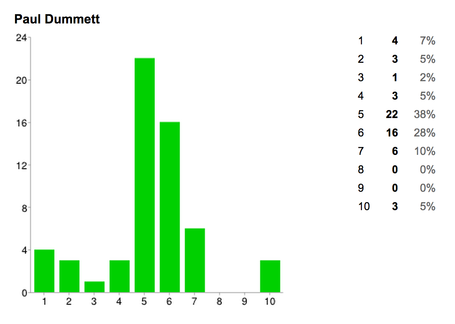 These numbers look low, but just wait. Tim Krul is actually the Man of the Match with his 6.1 rating, which probably should have been a tad higher. The lone goal conceded wasn't really his fault. That honor belongs to Fabricio Coloccini, who wasn't the lowest-rated defender thanks to an equally poor performance from Mike Williamson, whose best move was a professional foul that kept the game from getting even more out of hand. I thought Paul Dummett had one of his better games in recent memory - nothing to write home about, but still more even than most of the rest of the squad - and should have had a higher rating, but it's likely that his reputation got in the way of a more honest assessment. 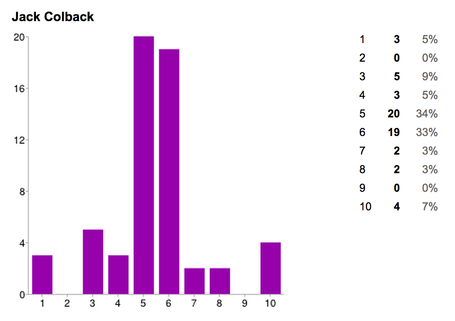 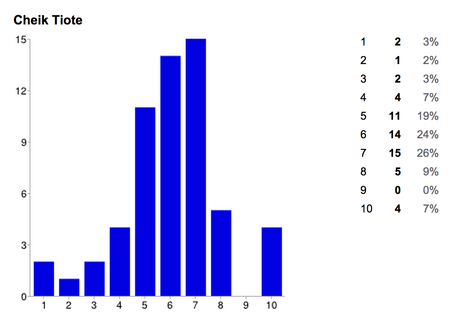 The pivot got much better reviews than did the rest of the midfield, and for good reason. The problem wasn't with the buildup in the center of the park, but rather the lack of any ideas (much less execution) in the final third. By no means was it a stellar performance by either player, and in fact I think Jack Colback's score flatters him, but they weren't the problem. 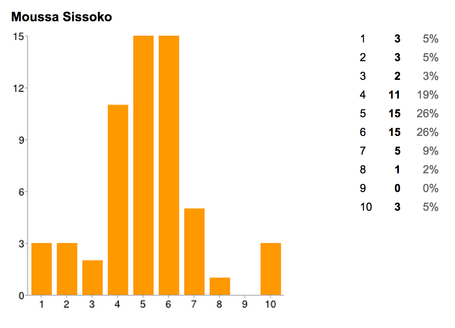 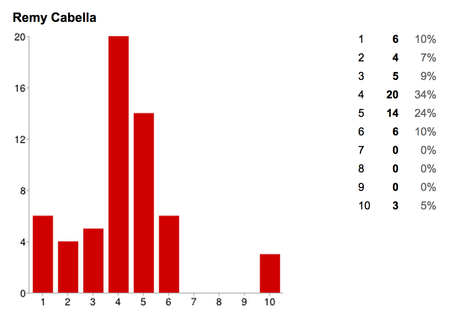 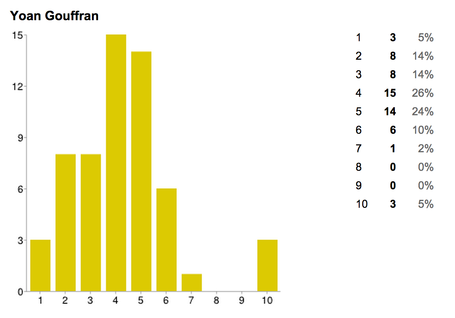 Moussa Sissoko seemed mostly disinterested in getting sweaty on Monday, and he rightly got the best score of the attacking midfielders, as Rémy Cabella provided more fuel for his haters by providing no real threat and giving the ball away whenever a defender got near, and Yoan Gouffran did his disappearing act that he is prone to performing. Gouffran received just 15 passes in 68 minutes of work and, according to Opta, touched the ball just twice in the final third, despite receiving instructions in the second half to support Papiss Cissé up front. 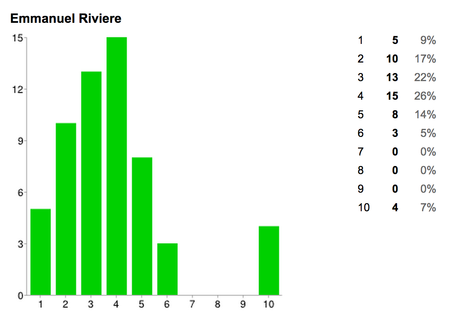 Emmanuel Rivière received the lowest rating among the players. He's never been a player that will flourish on his own, and it's up to the manager to put him in a position to succeed, but there's nobody else to blame for constantly panicking on the ball. The game is simply moving too fast for him, and the team is suffering as a result. 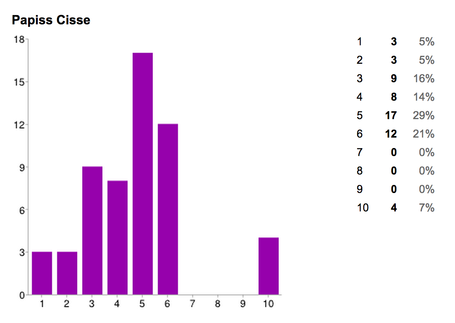 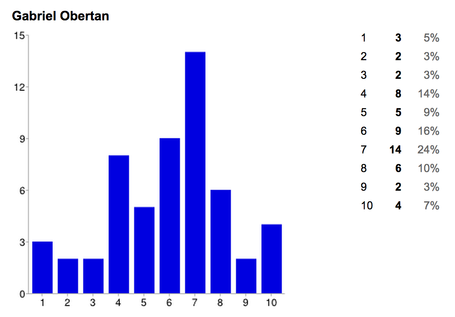 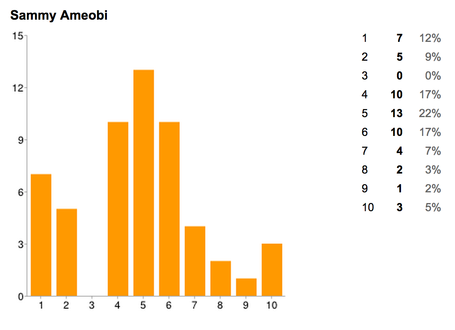 Gabriel Obertan was the standout among the subs. He played less than half the time of Gouffran, the player he replaced, and touched the ball almost as much. More importantly, his touches were dangerous. The Colback miss was a direct result of something we're not used to seeing from Squidward - a fantastic cross following a deft move to get free of his man. If Obertan is actually going to create chances with his blistering pace, he should probably be starting until Rolando Aarons or Siem de Jong is available. I'll take "Sentences I never thought I'd type" for 600. 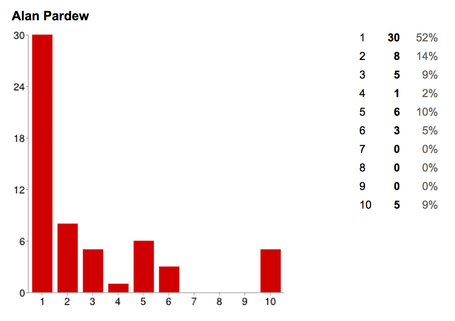 Papiss Cissé came on as a substitute in the Hull City match a week ago and saved a point by scoring a brace. The chances he received were made possible as a result of having a strike partner. Pardew, having witnessed this from the touchline, sent out the same starting XI, and when it was apparent that Rivière wasn't going to be able to do it on his own, replaced him with Cissé. That, a steady diet of long balls despite little high pressure from Stoke for much of the match, and a growing discontent resulted in a sub-3 rating for Pards, even in spite of the 5 trolls who rated him a "10." Over half of the respondents gave him the lowest possible grade, and in this case, it was well-deserved. The gaffer has made a big deal of the lack of support he receives from the fans this season. The solution? Give your team a chance to succeed. If Newcastle United and Stoke City played each other 100 times with the same lineups and tactics, Stoke would win 80-90 times.* Pardew is a constant victim of circumstance in his own mind, if his interviews reveal his actual thinking. Those circumstances - bad luck, science, whatever you want to call it - are self-imposed. If you play with a deck that's stacked against yourself, you're going to lose most of the time.

*Figures obviously made up.