Newcastle United host Crystal Palace Saturday. We've got your team news and a look at some chalkboards from the Fulham match to get you ready.

Newcastle United host Crystal Palace Saturday in what is sure to be the worst match of the Premier League weekend. Wait, where are you going?

For Newcastle, Loic Remy (calf) and Mathieu Debuchy (groin) will be out again, and Rob Elliot, Davide Santon, Gabriel Obertan, and Ryan Taylor appear to be no closer to returning. Hatem Ben Arfa will face a late fitness test.

Tony Pulis' Crystal Palace squad will be thin on strikers, as Marouane Chamakh (hamstring) and Dwight Gayle (ankle) have both stayed behind in London. Those two alone have scored over half of Crystal Palace's goals this season, so it will be up to Newcastle to put the ball in the back of the net just once to secure the three points. That's easier said than done.

As we think about Newcastle's game plan moving forward, it can be instructive to look back at what did and didn't work in the 0-1 loss to Fulham. Let's start with some positives.

First, let us say that the midfield continues to be strong. As many noted on Saturday, Vurnon Anita was the straw that stirred the drink. His vision and distribution were a major reason that Newcastle created any chances at all. Also contributing was Cheik Tiote, who recovered the ball a whopping 11 times, leading to plenty of counterattacking opportunities: 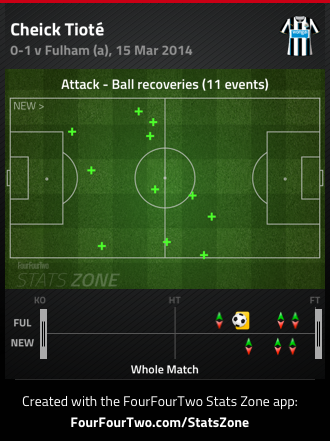 Yoan Gouffran was also instrumental in providing width. Each fullback found him 5 times, as did Moussa Sissoko who started on his opposite side and remained very close to the right touchline for the vast majority of the match. He also provided Tiote with an alternative outlet (8 passes completed) whenever Anita was marked or otherwise unavailable. 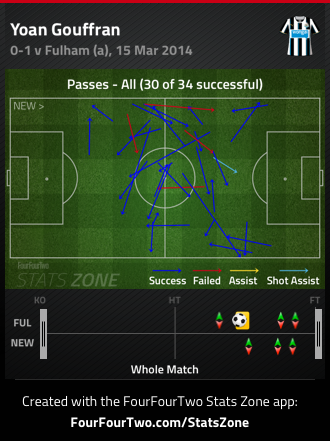 Unfortunately, Newcastle were too preoccupied with Route One Football (19/56 long balls) to do anything with the advantages they created for themselves. Part of the blame rests with Tim Krul, who was just 7/20 on such passes, but one expects the goalkeeper to lead the team in that department. By far the most horse-footed non-keeper was Tiote, who completed just 2 of 9 long balls, proving once again that Newcastle are ineffective against a disciplined high press. On a day in which he actually attempted no shots on goal and was a monster in the middle per usual, he still managed to infuriate by playing an incomplete game.

Playing the long ball a bunch is maybe fine if the target man is playing effectively, but if he's not, there's a problem. Luuk de Jong showed some promise in the prior two matches, but in this one he was subpar: 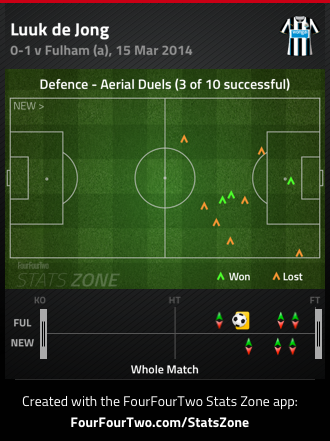 As a whole, the team won more than half of their aerial duels, but were just 8/18 on Fulham's side of the pitch. De Jong was certainly a huge part of that. It's also worth noting that he contributed little in terms of actually threatening to score. The one of his four shots that he put on net was a weak dribbler that even Robert Green could have handled cleanly. (sorry) Loic Remy is again expected to be unavailable, so if Newcastle are to score, they will need better performances from both of their forwards (Papiss Cisse's miss just before Fulham went the other way and scored still haunts me).

They'll also need to make an impression - any impression - on set pieces. Brace yourself for a depressing chalkboard. 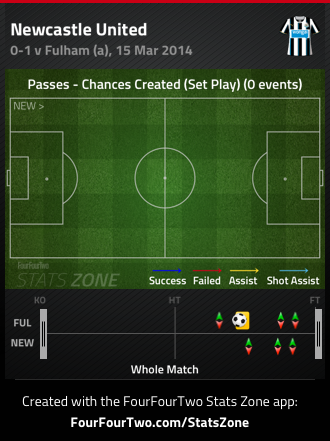 That's right: 0 events. Let's take a look at corners. You'll recall that earlier this season, Newcastle broke a streak of 386 corners without a goal when Loic Remy tallied from a Yohan Cabaye offering in the first minute against Norwich City. It's hard to get much worse than the Magpies were during those 785 days, but not for lack of trying. 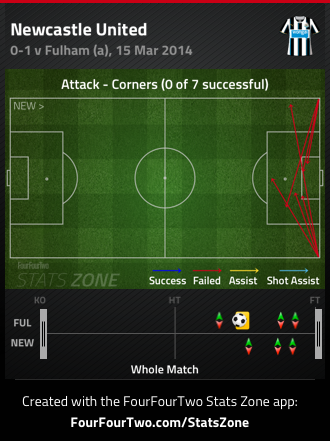 Not one of these was close. Can somebody get Ryan Taylor on the phone and ask him how close he is to returning? Failing that, can we maybe insert Sylvain Marveaux into the lineup? Failing THAT, how about anybody else aside from Paul Dummett?

I'm mostly joking about Dummett when it comes to the corners. I'm not sure that it really matters who is taking the kicks from the flag, since Newcastle won't score in any case. I'm more serious when it comes to Dummett at left back. His defending was improved this last week (nowhere to go but up), but moving forward he was a butcher. It's hard to represent on chalkboards, but bear with me a moment. First, take a look at the passes he received. 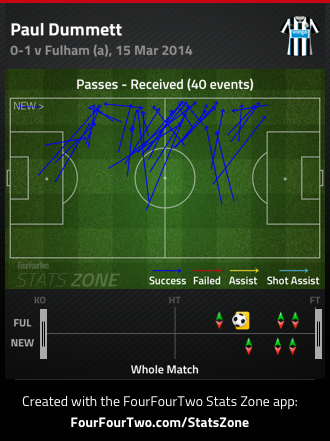 You'll notice that many of these were in advance positions. Good on him for making himself a viable option. Twelve of the 40 passes he received were from Fabricio Coloccini, as you might expect, but thirteen were from Cheik Tiote. As we noted, Tiote had a tendency to look for the long ball, so Dummett's role as an outlet was vital. Here's the problem: He did almost nothing with the ball once he got it. 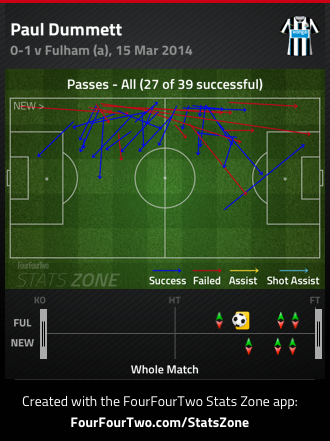 Lots of those blue lines are square balls, and there's nothing inherently wrong with that, except that the team is limited in what it can do when the main presence on one side of the pitch (remember that Gouffran was playing a roving role) is unable to move past defenders and play an effective ball. Here's another look, just to drive home the point: 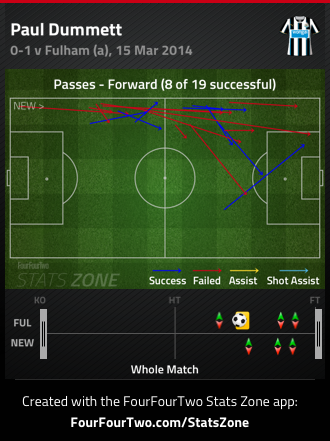 I want to be clear that my main quibble with Dummett is not what he does down the pitch, but what he offers (or doesn't offer) on Newcastle's half of the pitch. However, if you're going to put up with deficiencies on the defensive side of the ball, you would hope to make up for it with something substantial going the other way. Massadio Haidara is healthy. Why isn't he the starting left back?

I hope I'm not overselling my distaste with the left back situation. The main problem with Newcastle is and will continue to be getting consistent production from their forwards, at least until Loic Remy returns. Crystal Palace may be close to Fulham in the table, but they've conceded far fewer goals (38 to 65). Unless something changes drastically, we can probably expect Newcastle to extend their failed to score streak.

That's why I'm advocating for the return of the controversial Hatem Ben Arfa. Show me:

At least one narrative dies

It started out as a joke, or at least that's how I perceived it, but like anything on the internet, it quickly became irrefutable law. I'm speaking, of course, of the Alan Pardew Halftime Team Talk, which is one way we explain the tendency (or perhaps perceived tendency?) of the team to lay an egg at the beginning of the second half following a good or perhaps decent enough opening 45 minutes. Presumably, the gaffer is so inept at motivating his team that his speeches often have the opposite effect, like so many late-90s knock-off posters. "He told Tim Krul to make a poor judgment on that cross," we lament, and many of use are (were?) kidding, because how else do you deal with depressing play? There are those who actually believe that Pardew is actively sabotaging the team during the break, and hopefully this Saturday's performance under John Carver (okay before half, worse after) has debunked that narrative. Regardless of what we believe to be the cause of the squad's inconsistency, I think we can all agree that a solid 90 minutes with no let-off would be nice.

I'm tempted to go 0-1 again, because this has the look of another performance where Newcastle enjoy the lion's share of possession early but fail to find the net, leading to a frustratingly soft goal. However, Palace already struggle for goals (19 from 29 games has to be some kind of record) and will be missing their top two scorers in Chamakh and Gayle. There's only one other player left - Jason Puncheon - who has scored more than one goal this season.. This is as nailed on for 0-0 as it gets.