Newcastle United have been terrible for months. Who is to blame for the problems at St James' Park?

Newcastle United lost 0-4 to Southampton Saturday in one of the most lopsided matches I've ever seen between two supposedly evenly-matched competitors. This post isn't really about that match in particular, but let's take a brief look back at it anyway, because we'll be using it as a case study to say some larger things about the club in general.

The first thing we need to say about this match is that if you didn't watch, you might think that I'm using hyperbole when I describe it as the worst thing ever. THIS IS NOT HYPERBOLE, OR MAYBE IT IS, BUT ONLY SLIGHTLY. Southampton attacked Newcastle's goal all match. Newcastle barely took enough shots to surpass the number of goals that Southampton scored. 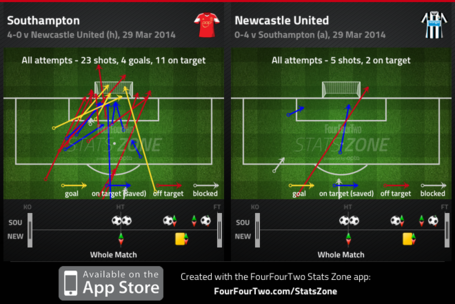 5 shots. Five. That's how many Jay Rodriguez took by himself. Two of the Magpies' shots were from outside of the box, and they were blocked. The best shot taken all game may have been the one taken by Cheik Tiote from way out. You know the type - he looks up, surveys the players standing around not making runs in front of him, and says, "Why not?" The announcer is then prompted to say, "He hasn't scored since that famous blah blah blah Arsenal three years ago." We've seen this movie one hundred times and hated it every time. That was Newcastle's best chance of the game.

There's more. From the "NUFC have been so bad at this for so long we're numb to it" department: The Toon were only 63 of 101 on passes in the attacking third, and 5 of 18 on crosses (only 3 of those from open play). The corollary to the crossing problem is that they were 9 of 22 on aerial duels, and only one of those wins could be considered even close to the Southampton side of the pitch. Papiss Cisse, the lone striker for the majority of the match, touched the ball a scant 33 times. He received the ball inside the penalty area exactly one time. He passed to another player in the box...zero times. We could spill a ton of internet ink going on and on about how bad the Toon were, using both qualitative and quantitative analysis.

But that's not the point. The point is that this has been going on for quite some time. A couple of weeks ago, I posted the following graphic on Twitter, with the caption "Let's play 'Spot the Outlier.'"

Since then, Newcastle have tallied one against Crystal Palace and failed to score against both Everton and Southampton. If you're keeping score at home, that's a total of 7 goals from 10 matches, with four of those coming in a match where (A) Loic Remy was healthy and not suspended, (B) Steve Bruce played a 3-back formation in the year 2014, and (C) both Maynor Figueroa and Alex Bruce had howlers (as opposed to their usual stellar play). So, aside from that one day, the rate is 1 goal for every 3 games played.

You'll notice that I set the endpoint at Yohan Cabaye's departure. There's no doubt that Cabaye was the straw that stirred Newcastle United's drink, and perhaps it's no coincidence that Remy has been unavailable for the majority of the above games. Take the consensus two best players away from any team and you'll notice a drop in quality. But should it ever be this bad? It's too easy to blame Mike Ashley and Joe Kinnear for Newcastle's run of poor form.* In my opinion, nobody is innocent. So let's run down the gauntlet and name all responsible parties.

*How long does the "form" have to be poor before we label it as "class"?

It's the Owner's and (Departed) Director of Football's Fault

"If I'm going to be asked to cook the meal, I'd like to be able to pick the groceries."

"Judge me on my signings."

Let's start with the obvious. For two transfer windows, Joe Kinnear did nothing. He scuppered the free transfer of Douglas, claiming not to know enough about the player, despite the fact that Graham Carr and Newcastle's scouting department had been tracking him for at least a year and probably more. He finished a deal that had been in the works for months before his arrival when he brought Loic Remy in on loan. Luuk de Jong, who has been up and down before and since his move to Newcastle, was another Kinnear loan. He signed zero senior players. Oh, and he sold Cabaye. An already mid-table club that fails to invest in two successive transfer windows will not progress.

Perhaps that's the point. Newcastle were almost relegated for a second time under Mike Ashley last season when they had to deal with a congested European schedule (and - hey, there's a pattern here! - a summer where they failed to bring in players). What would be the upside in accidentally qualifying for a European cup competition once again? Nothing, if your primary concern is the balance book and you lack the understanding that paying players aggressive wages will maybe attract better ones, thus producing more money for the club. An unhealthy fear of Financial Fair Play regulations will help here as well. Once it became clear that Newcastle would be safe this time around, there was no longer any incentive to keep a player that would fetch £20 million on the open market.

It's the Manager's Fault

"In a football match, everything is complicated by the presence of the other team."

"How do i get squad harmony in football manager 2009?"

Thanks to Mike Ashley and Joe Kinnear, we're now living in the Lame Duck Era at Newcastle United. It's clear that nothing in terms of results or performance is expected from anybody in the front office. In that case, it's incumbent upon the manager to give the players a reason to play the game. You know, motivate them. Alan Pardew headbutted a player on the opposing team. Surely the players look up to him as a leader of men?

Actually, that's taking it too easy on the gaffer. This slide began long before Pardew tried to block David Meyler from getting to the ball for a throw-in. The number of times that the Magpies have played a complete 90 minute match this season, with or without Yohan Cabaye, can be counted on one hand. Alan Pardew has always been too stubborn and too willing to tinker all at once. A lucky 90th minute goal means the squad will go unchanged the following week, but a promising performance from a fringe player will result in several weeks on the bench, as he tries to recreate that magic from a different angle. The formations rarely match the personnel. The set pieces have been broken since day one and remain so today. The team constantly and consistently plays down to supposedly inferior competition.

I've had several conversations with fans of opposing teams this year that have started with some variation of, "Pardew has Newcastle United in a good spot." It's an easy enough mistake to make. In many eyes, Newcastle is still a newly promoted club, and for them to finish fifth two years ago is an amazing accomplishment. (It was, just not for the reasons that most people think.) Now, they're well above the relegation fray after a slight hiccup. Must be the steady hand at the wheel, right?

Well, no. I'm not deluded enough to think that Newcastle are still in the glory years, but I do believe that this is where they ought to be. They have, or should have, plenty of resources. This club has one of the best scouting departments in the country. Hatem Ben Arfa, Yohan Cabaye, Cheik Tiote, Mathieu Debuchy, Davide Santon, Moussa Sissoko - these are all players that were acquired for less than £6 million each. The lack of money shouldn't be an obstacle, but at every turn, Pardew is bemoaning the lack of resources at his disposal. He's right (see the section above), but he's also dead wrong.

It's the Players' Fault

"Integrity is doing the right thing even when no one else is watching."

"My earliest footballing memory was running around the streets of Bauru with a group of my friends. We couldn’t stop thinking about football and would play from day to night. At the time, we were very poor and could not afford a ball. So we used anything we could to kick around – such as a stuffed sock, a grapefruit, anything to play the game."

There's a certain security in knowing that your performance, good or bad, will matter for nothing in the end. Newcastle have nailed on for an 8th-10th place finish for months already, so why not show up, collect a check, and carry on living your life? The manager regularly handcuffs the team with his tactics, then blames outside influences when it doesn't work. There's no accountability.

That's the culture, and the players have little to do with it, but it's up to them to rise above. This sounds a bit like asking a middle school class to behave for the substitute, but it shouldn't. Why should professional players, making obscene wages and playing at the top level of the game, suffer for motivation? They clearly had no interest in playing competitively on Saturday (or most other Saturdays throughout 2014), and on some level that lands on the manager's shoulders.

But on another level entirely, each player is responsible for himself. If the club doesn't care whether or not you play well, why not put in a performance to be proud of? Why not respect the fans that pay actual money to watch you play? Why not play for the love of the game?

I'm sorry if I'm turning into Blogger Murray Chass or something, but the passion on the pitch doesn't match the passion in the stands, and that's a problem for me. I can root for a bad team that tries. I'm having trouble rooting for this team, which should be better than it is, because they don't seem to try.