A chronicle of the Newcastle fans walkout

Several Newcastle supporters walked out of the Cardiff City match in protest on Saturday. Here's what it looked like.

Share All sharing options for: A chronicle of the Newcastle fans walkout

Newcastle United fans walked out of what would eventually become a 3-0 victory over Cardiff City Saturday, and many, if not most or all, sang songs of protest while they were inside St James' Park. Variations of "Get out of our club" and "Pardew out," among others, were clearly heard over the broadcast, and as the 60th and 69th minutes approached, the television cameras focused more and more on the stands, rather than the action on the pitch. Every time Alan Pardew approached the tactical area, he was booed, and homemade signs were everywhere. Oh, and Hatem Ben Arfa was there: 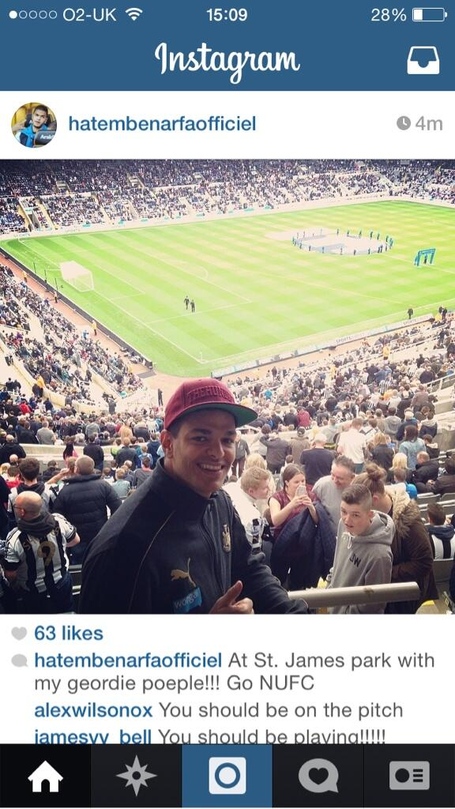 Some images and descriptions of protests and walk outs:

Again, there were two walk out times communicated to supporters, and the number of those leaving at 60 minutes was perhaps less than a hundred, according to reports. The 69th minute exodus was a bit more substantial.

In his infinite wisdom, Mike Ashley decided that the best way to squelch unrest was to take Newcastle supporters' toys away.

A noisy rendition of "We want Pardew out," there. Booing from the Gallowgate as stewards try to nab banner. Loud against Ashley, too.

When in the history of anything has this sort of behavior from those in power resulted in anything but more resolve from the protestors? How has the media ban worked out for you, Mr. Ashley? Here we have another example of mismanagement from the chairman.

Support of the protests was not unanimous, as some fans booed those who chose to walk out and lashed out on Twitter. The common rebuttal to the walkout (Mike Ashley already has your money and doesn't care) was debunked by the actions of St James' Park staff. A message was sent, and it's clear that it was heard. With the possible exception of Tom Hicks, who has the thinnest skin of any executive in recent memory, a "______ Out" has never resulted in a sale. (To be clear, the Hicks situation had more to do with the way he was hemorrhaging cash, but I'll never resist the chance to take a shot at him.) However, the club must now make a response. So far, the path they have chosen has been censorship, but if they continue with that philosophy, they will be very uncomfortable indeed. The manager retreated back to his seat every time he was booed, and has previously stated that the press has gotten into the head of his team.

Of course, there is the mitigating factor of the win. Setting your sights low (top ten, rather than, you know, as many points as possible) results in fewer disappointments. That is not good enough for the fans, but employees who were guaranteed bonuses will be happy after today, unrest from the fans notwithstanding. It will be interesting to see how the traveling support for next week's match against possible/probable champion Liverpool will conduct themselves. A final word:

Pretty sure every fibre of supporters who walked wants to support but they wanted to make a point. Hard to ignore. Toxic here #nufc