Debuchy and Sissoko get their turn for France as we move into Day 4.

Potentially two more Newcastle players will see action tonight as France take to the pitch. Goals abounded in Day 3, as the World Cup has delivered action as promised.

There were goals galore in Day 3 of the tournament...

Columbia started the day with a 3-0 win over Greece. Columbia went up early with a fifth minute goal, and there wasn't really much from Greece to counter to that. Two second half goals saw Columbia squash any dreams of Greece stealing a point.

The match also saw the first American in the tournament: referee Mark Geiger.

Costa Rica provided possibly the shock of the tournament when they scored three second half goals to beat Uruguay 3-1. Uruguay converted a penalty early, but they were flat in the second half. CONCACAF is undefeated in the tournament.

Was Team USA watching this one? Yes.

Uruguay should have played them on snow…

For 20 minutes, it looked like England and Italy would be a snoozefest, but then two goals in two minutes woke up the crowd and sent the teams into half tied at one. Mario Balotelli's 50th minute goal proved to be the difference in Italy's 2-1 win. England might have had chances late, but they made some horrendous passes and crosses down the stretch. Most notably was Wayne Rooney's corner kick that went into the stands.

Is this the worst corner kick in the history of the #WorldCup https://t.co/xewKr5I7Ce

The Ivory Coast used two second half goals to power themselves to a 2-1 over Japan. Resident favorite Cheik Tiote had himself a very nice outing, completing 71 of 75 passes. 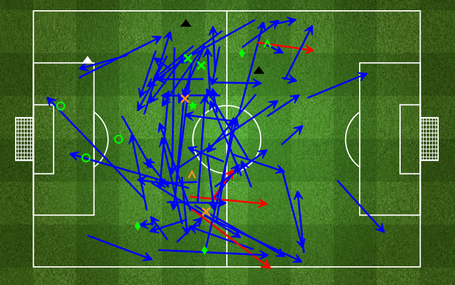 Ivory Coast are second in Group C, based on goal differential.

SB Nation gives you everything you need to know about the match-up.

The Swiss are confident that they can advance out of Group E.

Ecuador will be remembering Christian Benitez, their striker who passed away a year ago.

Was a drone spying on France? FIFA will investigate.

Like Tiote yesterday, Moussa Sissoko is hoping a good World Cup will help him out.

Mathie Debuchy is expected to play after his injury concern. But, how good will he play?

The Guardian looks at the journey of Honduras's Andy Najar.

Argentina has some star power, but don't count out Bosnia.

Will Argentina ever love Messi?

It's been a long road for Bosnia Herzegovina to make it to Brazil.

The Washington Post asks why there aren't many Latinos on the squad.

David Beckham says that USMNT will come together.

Premiership teams, including Newcastle, have their eyes on John Brooks.