Spain is gone, the Aussies come up short, and we are 1,000% elephants for this World Cup.

The defending world champs were gone. This of course opens the door for CHN Staff pick Ivory Coast to take over. The Elephants could lock up a place in the Final 16 tonight. Three games on the slate today, this is your open thread.

You might have been tempted (as I was) to blow off Netherlands-Australia. After demolishing Spain, surely the Socceroos would be no contest for the Oranje, right? Well, the Dutch won, but they had to earn the win. Australia held a 2-1 lead in the second half, and nearly put the game away when they flubbed on a shot in the box. The Dutch capitalized on the opportunity and scored, then added another in a 3-2 win. This one was arguably the best match of the tournament, if only for the shock value of seeing Australia playing the Netherlands way better than Spain did.

Speaking of Spain, they are done at this World Cup. The defending champions weren't all together (or there) in their 2-0 loss to Chile. The aggressive South American side capitalized on a massive goalkeeping error for their second goa, and Spain never really threatened. It's the end of an era for a Spanish side that Alexi Lalas referred to as the "best national team in history."  There was a scary incident before the match, when Chile supporters broke into the stadium.

If you skipped Croatia-Cameroon, don't worry. So did Cameroon. Down 1-0 in the first half, Alex Song threw a punch in a highly misguided attempt at breaking up a counter attack. Song was sent off, and from there, the rout was on. The Tablecloths, as they were dubbed in yesterday's open thread, netted three goals in the second half. Their win also keeps things interesting in Group A. Brazil and Mexico lead the way with 4 points, but Croatia now has three. Croatia's match with Mexico has massive implications.

SB Nation expects lots of goals in this contest. But do they expect 1,000% Elephants? 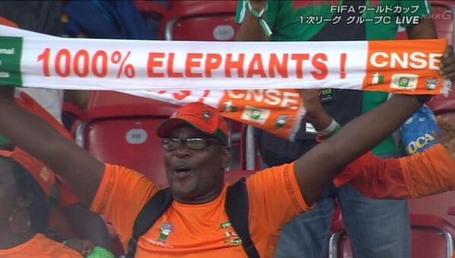 Columbia will be without striker Carlos Bacca.

A profile of Didier Drogba.

Drogba has also been saying good things about Tiote.

Luis Suarez is likely to play for Uruguay, in a "gamble".

Daniel Sturridge is hoping to have a bounce back game.

Japan must take the initiative in this match, because Greece never does.

Japanese fans helped clean the stadium after their side lost to Ivory Coast.

Columbia did what they wanted against the typically stout Greek defense. That must change if Ethniki are to win.

Some keys to beating Portugal.

Cristiano Ronaldo has been having some knee problems, but Portugal expects him to be ready on Sunday.