The Toon lost 0-2, but there were some stand out performers in your eyes.

It's time to close the book on the season opening loss to Manchester City. And to do that, we look at what 142 of you had to say about player performances in the 0-2 loss. There were some surprising results in here (at least to me), that we'll get into. Like I did last year, I'll put in the graph of responses and give you some of my commentary. 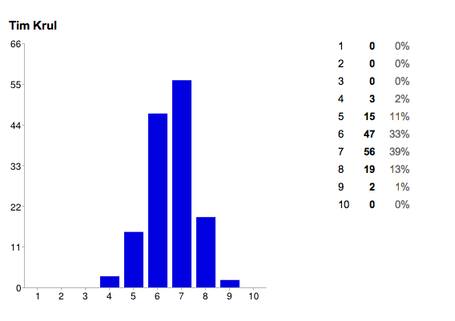 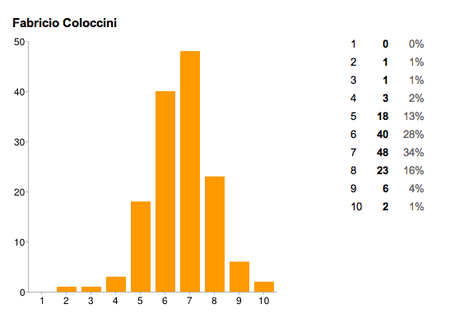 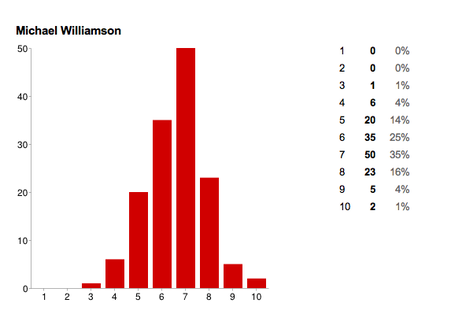 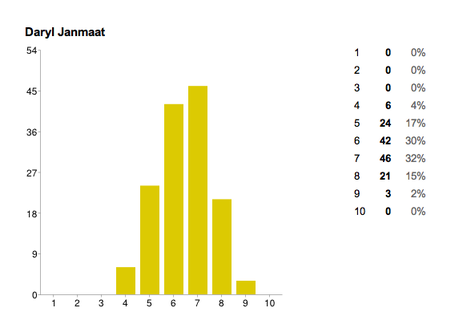 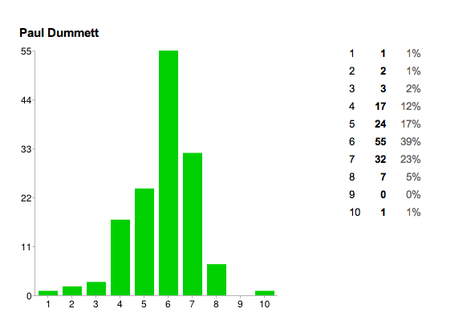 Overall, people seemed to be relatively OK with how that backline did. Maybe nothing show stopping about it. Tim Krul rated a 7 most often. I consider seven to be an above average game, while an eight would be considered a great game. I had no problems with how Krul did, and didn't think he had much chance of the two that City scored.

Out of the new signees, Janmaat was probably the least impressive in the community's eyes. It looked like he had an average day. Paul Dummett was a response that intrigued me. He received one vote each for a 1 or a 10. Overall, most people rated him a six. It seems like Dummett is getting the brunt of the disdain for the loss. I'm not sure that's fair, but it's how we voted.

It was said before, during and after the match that the back line would have to improve, and the votes here reflect that. It was a very pedestrian performance. I said on Twitter after that both goals could have been prevented. The defense did do a nice job of keeping the ball in front of them (for the most part), but with the offense coming up dry on the other end, the back line will indeed need to improve until goals start coming. 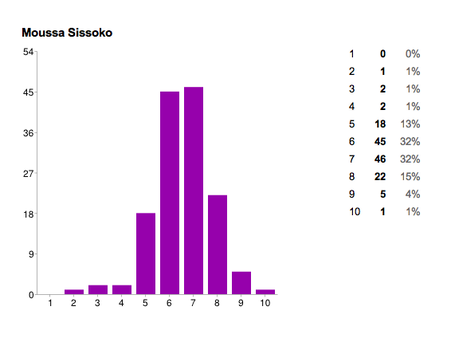 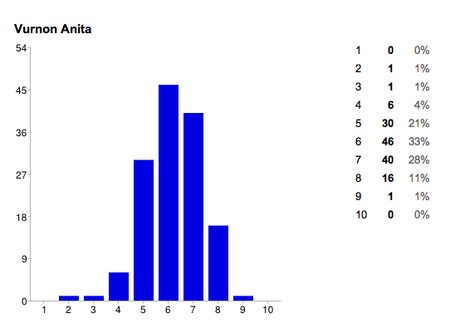 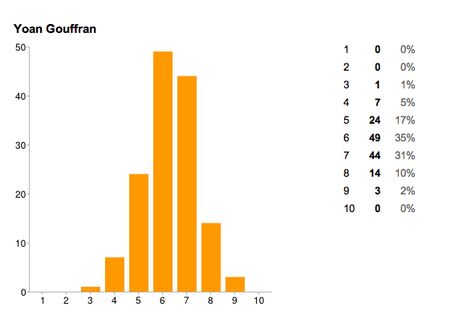 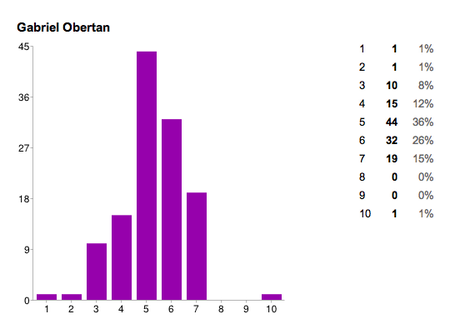 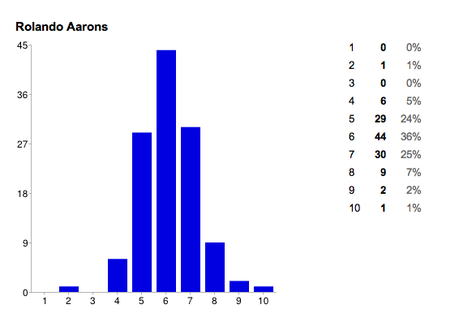 Moussa Sissoko was your "love him or hate him" player. The French International didn't do much to stand out, and some of you thought he was rubbish. But, he did garner some high end votes as well. Maybe a representative of each group would like to make their case below.

Anita and Gouffran also received pedestrian marks. This surprised me, because I felt the midfield played really well. But then again, maybe I made my divisions incorrectly. According to the stats, Gouffran had one shot (not on target, though no one from Newcastle did). His one shot came off a corner where the ball ping-ponged in the box and in typical Newcastle fashion wouldn't go in. His replacement, Gabriel Obertan (he does exist) failed to make much of an impression, as we has probably one of the lower rated players. He did receive one 10 rating, which I'm just assuming comes from Jim, our resident Obertan fan.

I feel that Aarons suffered from hype. The youngster had a good pre-season and fans were clamoring for him to get in. And when he did, it was nothing spectacular. He got away one shot and only 11 passes in his time on the pitch. He had limited minutes, but I think fans were wanting more. 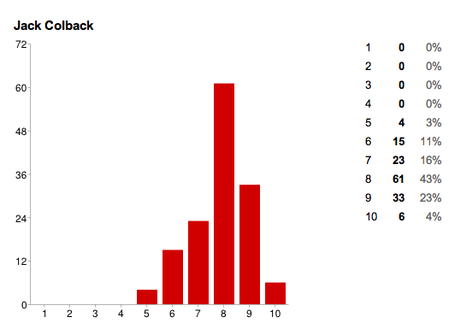 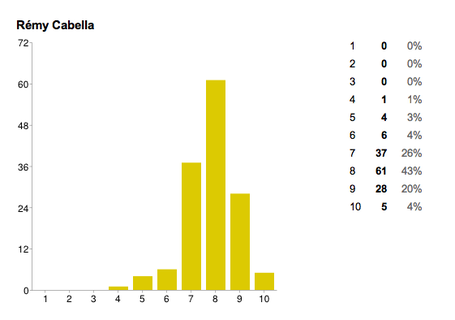 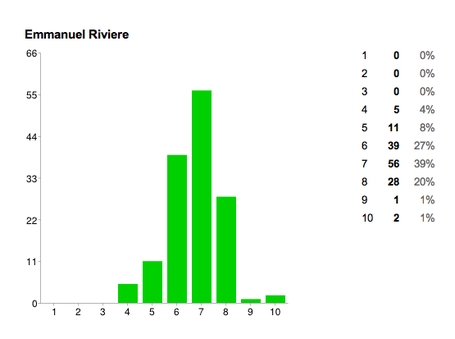 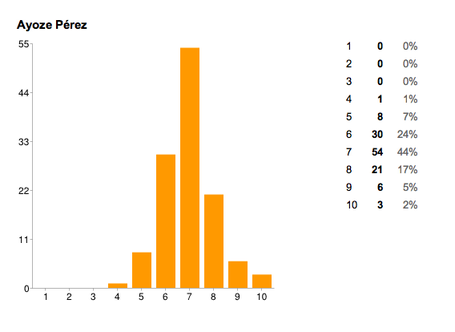 I felt these three starters had the most to do with the attack, with Perez coming in for Riviere (and nearly equalizing with his first touch).

Well, Newcastle fans seem to love Jack Colback. The ginger gave great deliveries into the box and kept possession well. I asked afterwards what a healthy Papiss Cisse might do with those types of deliveries. With 100 votes of 8 or higher, he was your Man of the Match.

The other new signings impressed as well, with Cabella also receiving high marks. Riviere didn't score as high, but still, people liked that they saw. Now, I have to think this is partly because for the last half of the year, we watched a Newcastle side that looked incredibly disinterested in scoring. With there being attacking intent, the Geordies were in love. But, remember, no shots got on target. That will (obviously) need to be improved going forward. The new signings did little to damper enthusiasm, but they need to bring their quality up just a hair for the results to show. 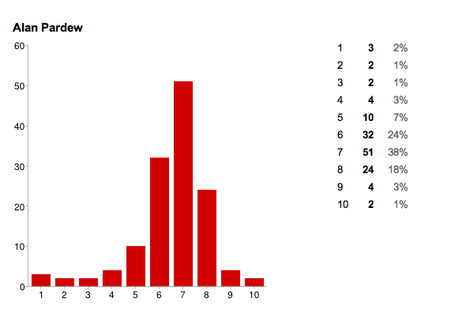 Last season, I asked how the community felt about the club's tactics and subs. That was in addition to rating Pardew. I'm hoping to streamline it a bit this year, but if you want those questions back, we can add them.

Overall, people were....let's call it "satisfied" with Alan Pardew. He garnered mostly sevens, and then even a couple of 10's. I felt that Pardew had a good game plan (read: he HAD a game plan for City) and the players had a good attitude out on the pitch. But, people have been calling for him to be sacked for awhile now, and the ones and twos don't surprise me (and wouldn't had we pulled out a shock 5-0 win). It seems that people are somewhat willing to give Pardew a little credit and see how he does with the new signings. The verdict after Match 1: You're just OK. Obviously, a draw would have tilted opinion a bit, but for now it seems like the fans will give Pardew the shortest of leashes.