One of Newcastle's new boys was named Man of the Match after Saturday's draw.

Newcastle United played Aston Villa to a 0-0 draw at Villa Park on Saturday. Here are the results of our player ratings poll. 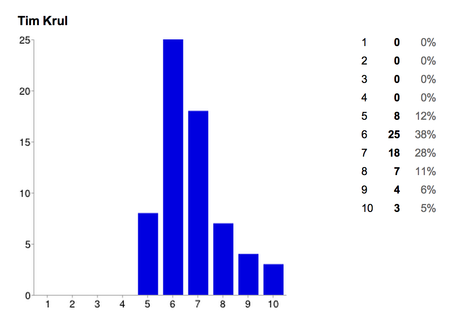 Krul wasn't given just a whole lot to do, but Villa came close on a few occasions and Timmy seemed to have it covered. They had a spell in the Newcastle end near the end of the first half, and Krul's leadership got them through it. It was a solid, yet unspectacular clean sheet. 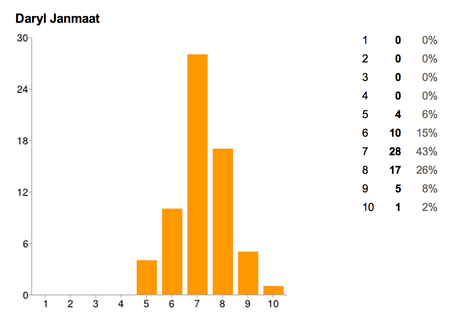 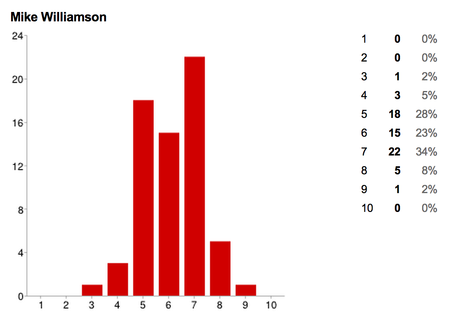 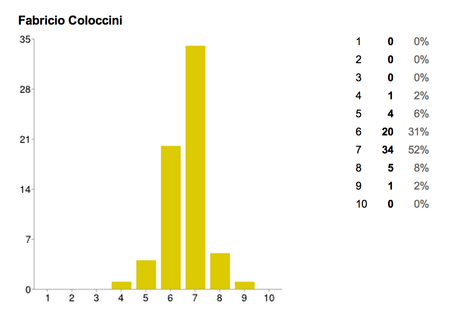 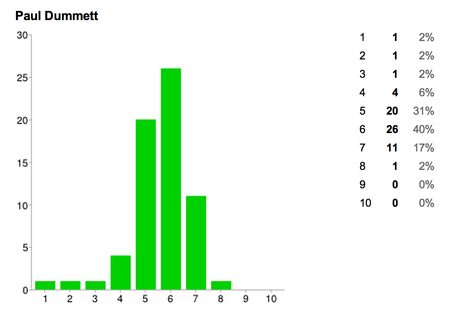 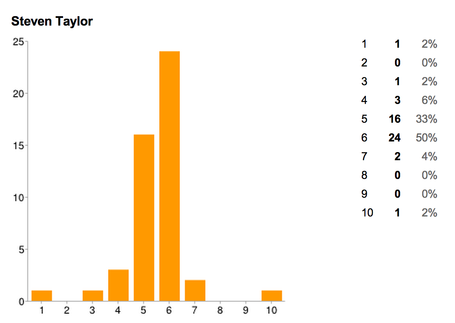 It doesn't quite look it from the ratings, but as a whole, the defensive unit played well. Williamson's rating is likely dinged because of the double yellow, but in all honesty, the first was a bit harsh and the second was more of the professional foul variety. Overall, he and Coloccini were a satisfactory partnership. Dummett got poor marks for a number of high profile mistakes and for generally allowing Aly Cissokho and Fabian Delph to do whatever they wanted on his side of the pitch.

Daryl Janmaat had a couple of key tackles and also managed to create some chances of his own, despite mostly playing a stay-at-home game. On almost any other day, it's not a Man of the Match performance, but because nobody else took hold of the game, he's the worthy pick. 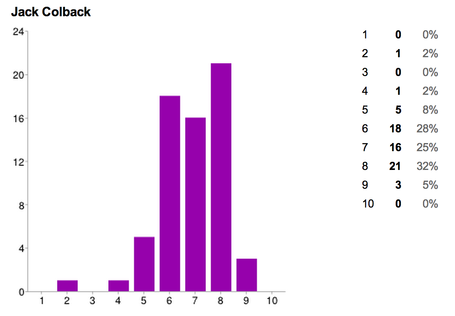 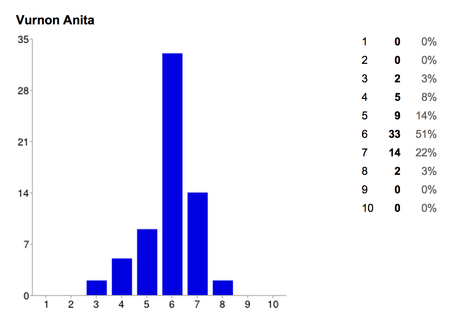 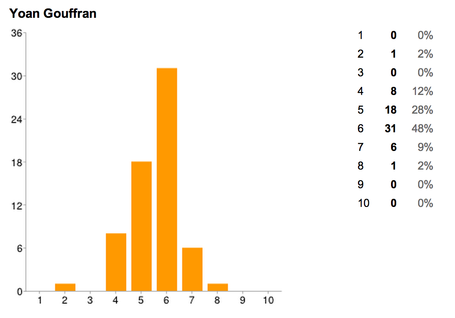 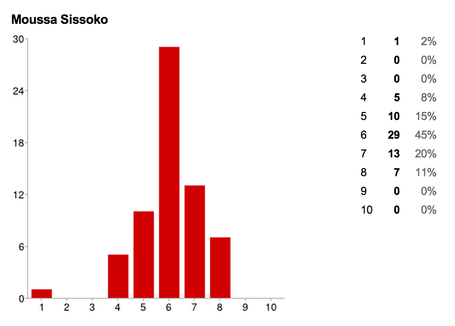 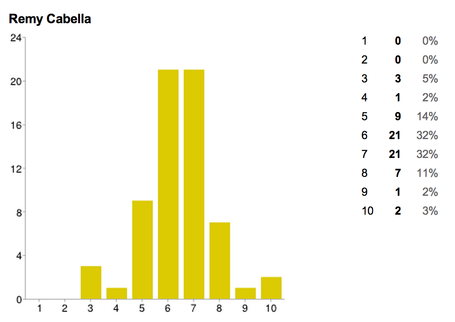 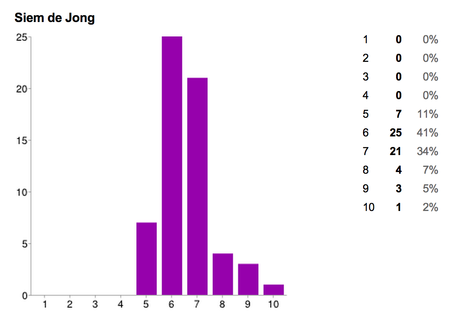 Jack Colback worked hard in the engine room once again. He set up a couple of chances on the counterattack and played with lots of width. I was surprised that he didn't receive the highest average score, and it's telling that he got more 8 votes than any other. Through 2 matches, he's been the best player wearing a Newcastle shirt. His partner, Vurnon Anita, touched the ball plenty and was fine in the middle of the park, but his final third passing (7/13) was less than stellar.

Sissoko and Gouffran were both punished by voters for their close-range misses, though I think both deserve a bit more credit for being involved in the buildup. Siem de Jong came on with 20 minutes left and wasn't heavily involved, but his touches were positive and he had perhaps the best shot of the day. Newcastle fans will be hoping for full health moving forward.

The biggest spread of votes (standard deviation = 1.37) belongs to the enigmatic Rémy Cabella, who frustrated some fans (including myself) with his soft, sometimes selfish play. Plenty of people seemed to be pleased enough with his performance, however, which seemed more like a vision of what could be somewhere down the road. Cabella's graph is fairly normalized in the middle, but the tails tell the story. There are enough people on both extremes that if he continues to play like he did on Saturday, we will be primed for a huge fight among the fanbase. 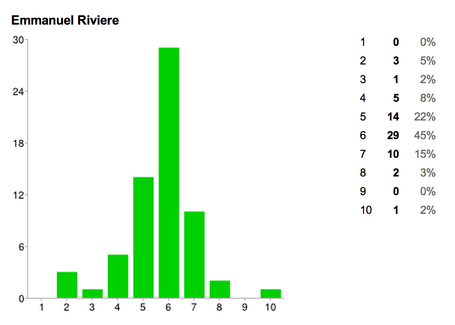 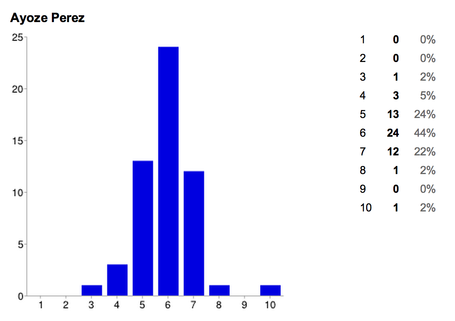 Rivière also missed a close shot, which was inexcusable, but he should also be recognized for his hold-up play (just not through the air!), and had any of the other players been on target around the net, we'd be talking about him as a bona fide table-setter. I've seen a lot of negative comments about his play, and while I don't want to pretend that he was particularly good, I do think there's hope for the near future. 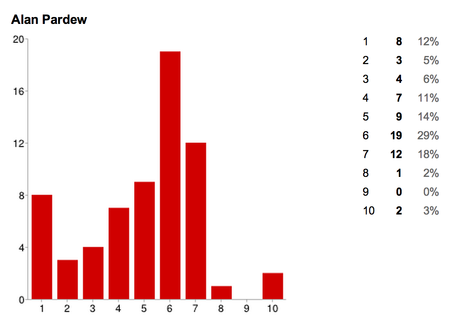 There are always going to be people who see in black and white and will refuse to acknowledge that Alan Pardew is capable of doing a single positive thing for this football club. That's understandable - he's given plenty of ammunition to the doubters during his tenure. On this occasion, however, I believe the 1 votes are unwarranted. Whether those votes are a result of the silly vine making the rounds (one tweeter actually used that clip as evidence that Pardew had "lost the plot") or because they disagreed with the tactic (much more understandable), it's pretty clear to me that these 1 votes, typically reserved for the poorest of poor performances, are symbolic of the growing frustration with the direction of the club on the pitch. No, they haven't scored yet, but there were plenty of chances. The players simply didn't execute. I'm not happy with the continued inclusion of Paul Dummett, but Pardew was always going to pick the same team that played Manchester City close for the majority of a match the week before. It wasn't a display of tactical genius, but the game plan on the road was a good one. They took the game to their hosts and were the better squad for the majority of the match.