Newcastle relegation will not save the Premier League

Bad owners in the Premier League will still exist with or without Newcastle. Relegation will not change the stripes of Newcastle's owner. Stop saying it will.

Share All sharing options for: Newcastle relegation will not save the Premier League

The tide rolls in.  The tide rolls out.  Time soldiers on and – just as the sun rises in the east and sets in the west – when Mike Ashley-era Newcastle gets near the relegation zone at the end of the season, the stream of "Let Newcastle go down, they'll be better off for it!" articles come in kind.  The fundamental problem with a neutral making the argument that relegation will cure all of Newcastle's ills is that more often than not, neutrals do not have the detailed picture of why their argument is wrong from the word go.  The Mothership has published such an article and, much like their last piece about Newcastle United following Alan Pardew's departure, the "big picture" view of a neutral is not sufficient to understand the situation.

Stop saying Newcastle will be cured by relegation 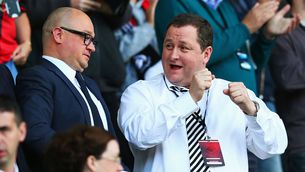 Cheering for NUFC to be relegated this season out of spite for Mike Ashley is not only misguided but could have very damaging long-term effects.

Just four days ago, I wrote a piece describing all the ways that believing Newcastle's relegation would cure them of all ills was an erroneous supposition.  Let's dig in, however, on a deeper level and look at some of the arguments that have been made in favor of Newcastle going down.

Going down will allow Newcastle to play young players and fix their playing squad!

Not really, no.  In addition to the point raised in my piece regarding the lack of senior squad relegation clauses, playing those young players in the lower league is essentially putting them in the shop window for the Sky6 clubs or clubs willing to pay a little above the odds for a talented young prospect.  This is how you end up ruining a £35m home-grown striker's career.  Had Andy Carroll not fallen afoul of exactly this idea, his career trajectory may have been significantly different and we'd be looking at Alan Pardew's tenure at Newcastle with completely different eyes.  This single player would have unlocked everything Pardew wanted to do and while relegation benefited the player, his agent and Mike Ashley's pockets, it has had lasting detriment to the club and their former manager.

All of that is assuming that Newcastle are able to bounce right back up like they did the last time.  Ask Fulham how such an idea went for them.  Ask QPR how a year in the Championship fixed all of their ills and allowed them to be better prepared for their most recent go at the Premier League.  This type of argument sounds great in rhetoric and looks fine on paper, but there is nothing to bear out that there is any true logic to it.

"But wait a second," you say, "Didn't Newcastle go down a couple of years ago and come back in a healthier place when they came back up?"  Sure they did.  The issues faced by that squad and the issues faced by this squad are neither the same, nor even closely related.  The squad that went down was laden with big money contracts to aging or declining mercenary-type players who were out to maximize ever payday they could while the still had a chance.  As a result, there was no choice but to jettison them prior to the year in the Championship where the broadcast monies from the Premier League weren't on the table to keep overpriced poor players on the books.  Change was dictated, not initiated.  Since that day, recruitment policies and contract negotiations have been conducted to keep salaries at a minimum level.  Even without relegation clauses in the contracts, it is going to be much more likely that bigger name players could stay. If Newcastle go down, will players leave?  Likely.  Will it be for the same reasons as the exodus of 2009?  Not at all.

If Newcastle go down, Ashley will sell!

This is another argument that I addressed in the piece I referred to earlier.  Take those reasons and add them to the tales of the likes of Blackburn Rovers.  Did Venky's sell up when the club went down in 2011?  Did Venky's see the error of their ways and suddenly start doing football business in football ways, paving the way for a triumphant Rovers return to the Premier League?  It is a popular myth that owners that don't want to spend will "see the error of their ways" and magically change their business ideas (which, it must be noted, made these people very very rich).  This has been disproved over the course of years.  It has been said that tigers don't change their stripes... and these men who have the money to own Premier League clubs are most definitely tigers.

The corollary argument to the "start with talented youngsters from within the club" is "Newcastle could bring in talented, highly rated young players from within the Championship or League 1."  This is another argument that sounds fine when you type it out.  When you hold it up to the light of what Newcastle have done over the course of the Mike Ashley era, however, the argument loses its luster.  Very few young players who have been brought in under these conditions have managed to hold the confidence of the coaching staff within NUFC.  For an Ayoze Perez, you are met with a Gael Bigirimana and a Massadio Haidara.  For each Perez, there are countless Dele Alli-type players that Newcastle will look like they have wrapped up, only to be out-spent by a club that can offer greater cache attached to the name that the young player is signing with.

Young players, and in particular young English players, come at a premium.  The premium is well beyond what Mike Ashley is willing or will approve for his minions to spend on what are essentially unproven commodities.  It is a business model that has worked well for him over the course of years, even if the misses in recent player acquisition have hamstrung the playing squad to a certain degree recently.  This all comes back, however, to the idea that relegation will spur Mike Ashley into spending.  It won't.

2008-09 Newcastle United was the exception that proved the rule.  Very few clubs actually benefit from such a catastrophic event in a club's history.  For instance, ask the fans of:

Ask them exactly how much relegation has fixed for their clubs.  The answer is going to be, to a club, that relegation has not helped their club.  It has not made the mean evil owners sell.  It has not made the ownership tigers change their stripes.  It has not allowed them to focus on bringing through young players from their academies to lead the charge to bring their clubs bursting into the Premier League with fanfare and plaudits. Some of these clubs have clawed their way back into the Premier League.  West Ham, Newcastle, Sunderland and Hull City have managed to make it stick, although somewhat precariously (three of these clubs are in the relegation fight again this year... can you guess which ones?)

Ultimately, it might be fun to say that relegating Newcastle will cure all that ills the Premier League with ownerships reluctant to spend, ready to punt a century of history to the curb, willing to change the way a club is called or the color of its primary jersey.  With this particular owner – and with modern owners in general – wishing relegation on Newcastle is doing nothing but wishing doom and ultimate destruction on a club and a fan base that don't deserve it.

Next Up In Soccer