How does Rafa Benitez sort all the full back options he has accumulated? A few observations:

Mike Ashley and his cronies failed to invest in the proper strengthening of Newcastle’s back four for too many years and the result was a defense leaking in-goals while fighting relegation, culminating in the concession of 65 goals last year (16th of 20), and crashing Newcastle back into the second division of English Football. In that time, we’ve seen a few talented right backs (Mathieu Debuchy, Daryl Janmaat) come and go, and we’ve seen young center backs Chancel Mbemba and Jamaal Lascelles showing quality, brought in from Belgium and Nottingham, respectively. More often, we’ve seen the players go: Jose Enrique, Danny Simpson, Mike Williamson, Davide Santon, Mapou Yanga-Mbiwa - all leaving the Black and White too thin at the back.

Rafa Benitez seems to have sorted out middle of defence, providing the required cover for Mbemba and Lascelles by bringing in Grant Hanley from Blackburn and Ciaran Clark from Villa. We’ll need this depth going through the long Championship season. Benitez also brought in additional players to fight for time in the fullback positions. DeAndre Yedlin from Tottenham Hotspurs and Achraf Lazaar from Palermo look to nail down the starting position at right and left back while 31-year-old Jesus Gamez comes, as a free agent after playing in La Liga at Athletico Madrid, to provide leadership, experience, and valuable depth on either side. What Rafa has done and what he plans to do with his fullback this year has yet to be determined, so let’s explore the possibilities...

In recent years, it’s been difficult to have confidence in any of the Newcastle players penciled in as left back: Davide Santon may have been the most talented, but I always thought he would have been better suited to the right side, as he never looked convincing on the left; Ryan Taylor was a liability defensively and it was only through the tireless effort and partnership with Jonas Gutierrez that Newcastle finished 5th in 2011-12, conceding a very good 51 goals; We’ve seen Massadio Haidara show potential only to get hurt over and over again; Paul Dummett has inspired no one in his three years as first choice left back; Due to an injury crisis and no better option last year, Steve McClaren threw in Rolando Aarons, who proceeded to look lost outside of his typical role as a winger; We’ve seen Kevin Mbabu look the part for two and a half games only to get injured with no sign of return; Ciarian Clark played 90 lackluster minutes against Bristol City; and we have yet to see Achraf Lazaar’s Newcastle debut.

Let’s start with those who can’t (or shouldn’t) get minutes as left back: Mbabu and Clark. I have a hard time understanding why Kevin Mbabu was shipped back home to Switzerland. To me, it seems like life in the Championship would be a perfect spot, battling for his place as Newcastle’s left back, but it’s easy to speculate from DC, far away from Tyneside’s trainingpitches. Despite his good performances last September for McClaren, Benitez and his staff decided to loan Mbabu to Young Boys, letting him rack up first team minutes.

Under no circumstance should Ciaran Clark be in Rafa’s starting eleven as a left back. He showed himself to be unable to do even half the job required by a modern fullback when up against Bristol City. It’s no coincidence that aside from the Gayle goal, Newcastle struggled to generate any scoring chances. 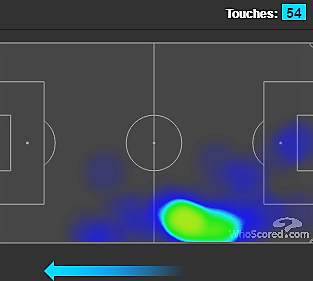 Clark had nearly no touches in Bristol City’s half, and as illustrated above, almost every one of Clark’s passes against Bristol City was within the defensive half. He lacks the vision and creativity to establish positive possession and create scoring opportunities. Once again, Newcastle was stuck trying to create every opportunity down the right flank, allowing our opponents to focus their defensive effort on only one half of the pitch (something we struggled with mightily last year, thusly we depended on Sissoko and Janmaat to facilitate all of our offense.) I’m not saying Clark isn’t valuable or that he wasn’t a good signing - he adds depth and fits in as cover at both center back and defensive midfield (necessary for the 46 league games and additional cup games), but I’m hopeful that Clark has seen his final minutes at left back.

Moving on to the players we will see most often at left back in Rafa’s starting eleven: Dummett and Lazaar. When healthy, Paul Dummett has been first on the team sheet, ever since the start in the 2014 season under Alan Pardew. There’s a small minority who really like him as a footballer (I’m not one of them) and I have a feeling that some thinking highly of Paul has more to do with him being a local boy, coming through the youth ranks, than his actual footballing abilities. 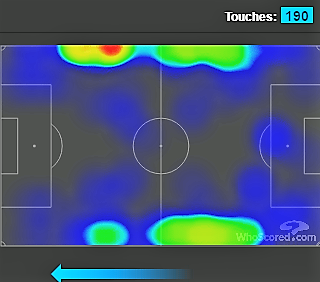 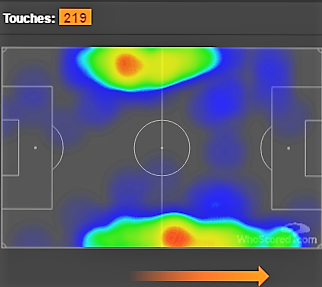 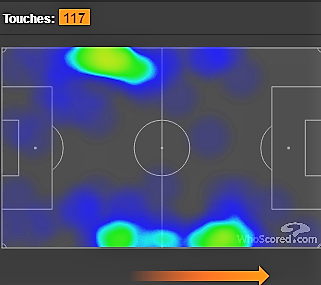 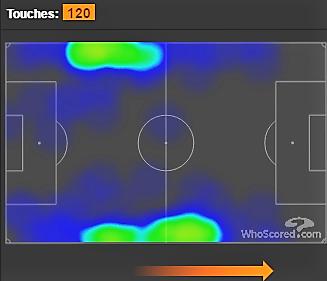 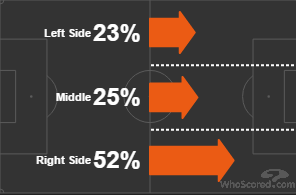 Looking into the heatmaps for the four games that Dummett’s played this season, you can see that he’s significantly less likely to get touches in the opposing half as compared to his counterpart, causing most offensive moves to come down the right side of the pitch. In the most recent game against Brighton, you can see that more than half of the attacks came down the right side where Richie, Diame, and Anita combined time and again. Yoan Gouffran looked his most confident and dangerous since first arriving at Newcastle from Bordeaux, but paired with Dummett’s lack of offensive contribution, he was mostly isolated with no other options than to take opponents on one-on-one and to take shots from a distance. While Dummett can fill in as cover at left back and center back, I will be happy to see a new signee, Achraf Lazaar, as the first name on Rafa’s team sheet at left back.

Our new 24-year-old Moroccan left back brings with him many qualities we’ve been lacking since Jose Enrique’s departure. He is unafraid to get forward, press high, provide quality balls into the middle, take defenders on, and take quality shots, all while possessing the skills to track back and stick himself into tackles. Just check out a Youtube highlight video or two to get excited for Lazaar’s debut in black and white stripes.

Palermo wasn’t relegated despite nine coaching changes last season, so Lazaar was undoubtedly asked to take part in a near infinite amount of different tactics. I took a closer look at few games that he played in as part of their back four. 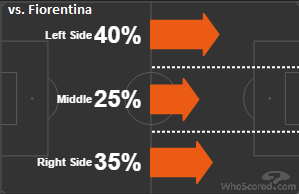 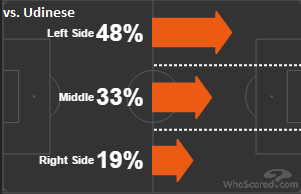 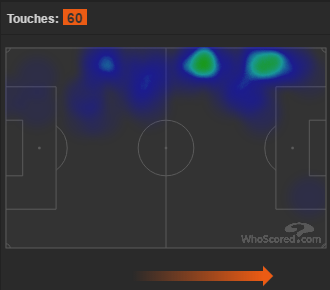 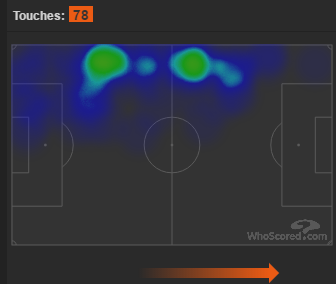 In both a big loss (Fiorentina 3-1) and a big win (Udinese 4-1), you can see that a majority of Palermo’s attacks were generated down the left side. In both instances, Lazaar’s touches pushed aggressively forward, highlighting his offensive tendencies. If Lazaar’s skillset translates from Series A to the English Champions (and fingers crossed, next year in the Premier League) he should find himself getting the majority of minutes at left back for years to come.

At right back, we’ve seen Daryl Janmaat go to Watford, followed by the signing of lightning-quick American, DeAndre Yedlin. Vurnon Anita may have found his best position at right back, but I as I think most, see him as utility player that provides cover at fullback on either side of the pitch or holding midfield, much like we used to see out of James Perch. 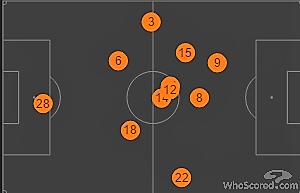 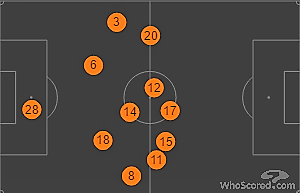 Here, it’s important to point out the difference in positioning between Janmaat and Anita. Notice how far Janmaat (22) is forward versus Huddersfield, pushing Ritchie (11) into the middle of the pitch, while Anita (8) is in a much more common position as a full back, allowing Ritchie to work down the flank. I don’t think Janmaat was necessarily the cause of either Newcastle loss to start the year - he’s a very talented player - but Newcastle seems to have found more balance with Anita at right back, and I’m hopeful that they can maintain that balance when DeAndre Yedlin is installed as right back.

With Kyle Walker and Kieran Trippier ahead of Yedlin on the Tottenham depth chart, the American had to find a new club. After a successful loan in the Northeast last year with Sunderland as Sam Allardyce’s first choice right back, Rafa signed Yedlin up for our promotion push.

Not seeing much of DeAndre outside of the USMNT set up, I looked at a five-game stretch he played last year, starting with the Tyne-Wear Derby in March. Big Sam set up the Black Cat’s in a 4-1-4-1 (my preferred formation for Newcastle going forward this year btw) with the Italian Fabio Borini playing on the right wing in all five games.

When Gini Wijnaldum beat his man in the 83rd minute and crossed the ball into the box, it was Yedlin, ironically, who was victimized by Aleksandar Mitrovic for the equalizing tally. But, it was also Yedlin who defended and contained (3 blocked crosses, 4 clearances, and a crucial tackle inside the 18 yard box) a dangerous and motivated Moussa Sissoko playing on the left that day. Offensively, Sunderland attacked down the right side 45% of the time. 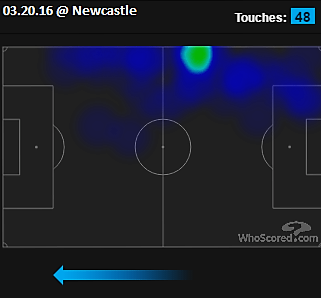 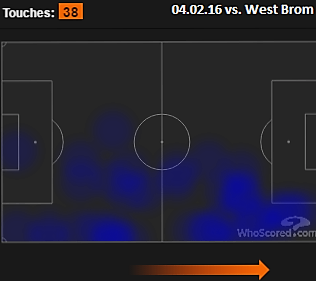 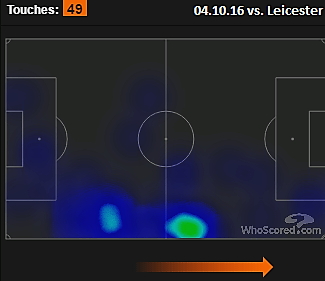 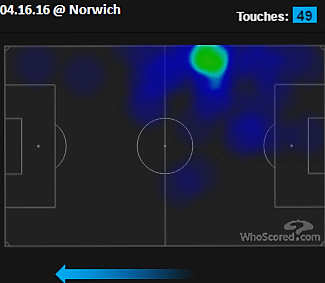 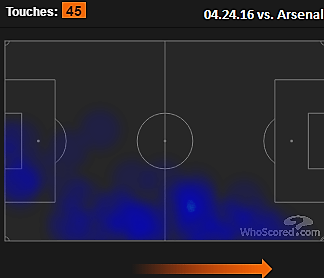 Looking collectively at these five games (1W, 3D, 1L) it’s clear that Yedlin is growing into a very good, well-rounded fullback (we’ve seen his offensive talents showcased for the USMNT, but judging by Allardyce’s confidence in him the defensive side of Yedlin’s game has greatly improved, too). You can see the balance that DeAndre has developed since he burst on to the scene, flying forward for the USMNT as an offense first fullback.

While thoroughly developing as a defender, he’s also been able to maintain his offensive abilities. Aside from the West Bromwich game, Yedlin led or was second in pass attempts, and Sunderland primarily attacked down the right side.

As the season restarts and gains momentum, we will see how Rafa Benitez decides to set up his team. How does he rotate through his squad and what do my observations mean? Have Yedlin and Lazaar had enough time training with their new team to force their way into the starting eleven this Saturday? I envision Benitez taking a conservative approach and sticking to the same back four we saw keep a clean sheet against Brighton a fortnight ago but it will only be matter of time before our new signings break through.

(All statistics and charts taken from whoscored.com unless otherwise stated)