Newcastle United are looking to add a big center back to their roster in the upcoming transfer window, as Alan Pardew has noted the need for a bigger player on the back line, and it appears they may have someone in the works already. 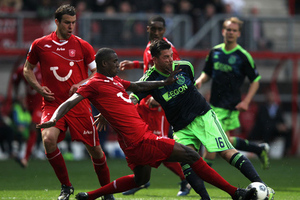 From the 2012 window: He's somebody who could work very well alongside Fabricio Coloccini, locking down most of the major deficiencies in Newcastle's defensive third. At the very least, he'd be a very impressive depth signing, were Steven Taylor to beat him out for a regular spot in the Starting XI. Given his apparent desire to leave Holland, Douglas seems a likely signing for Alan Pardew, as long as a bigger club doesn't come calling first.

Some Italian news outlets have reported that the Magpies have signed free agent center back Douglas, but those reports are likely premature. The Journal reports that Newcastle is indeed interested in the 6'4" defender, and have been for a while, but will be competing for his services.

Reports in Italy claim the player has agreed a deal to join Newcastle, but The Journal understands that is jumping the gun, with Lazio, Anzhi Makhachkala and fellow Russian side FK Krasnodar also in negotiations with the player's agent.

Italian sources also claim that United have made an offer to the player which is in excess of the other deals on the table.

The Magpies have been looking for someone with aerial ability in the box and attempted to sign the FC Twente defender in the past, but the deal fell through and Newcastle walked away.

Douglas seems to be carded more often than you'd like, but the 25-year old defender may help strengthen a back line that was shaky at times in the 2012-2013 season.